On this day back in 1840, Thomas Nast, the father of the American Cartoon, was born in Landau, Germany. He came to the United States as a young man and quickly became one of the country’s most influential cartoonists, drawing for Harper’s Weekly and becoming a celebrity in the process. Following his death on December 7, 1902, Thomas Nast’s obituary in Harper’s Weekly stated, “He has been called, perhaps not with accuracy, but with substantial justice, the Father of American Caricature.”

Nast’s drawings were instrumental in the downfall of Tammany Hall’s William “Boss” Tweed, who so feared Nast’s cartoons that he unsuccessfully attempted to bribe the cartoonist to stop. Tweed said famously, “Stop them damn pictures! I don’t care what the papers write about me. My constituents can’t read. But, damn it, they can see the pictures!”

Tweed was eventually convicted for stealing between $40 million and $200 million from New York City taxpayers through political corruption.

Nast is perhaps best known for his political cartoon that first showed the GOP as an elephant, and the Democratic Party as a donkey, symbols that both parties (and cartoonists) use to this day.

He also created the bearded, plump image of Santa Claus we recognize today, for the cover of the 1862 Harper’s Weekly Christmas season cover. At the time, most depictions of Santa Claus showed jolly St. Nick as a tall, thin man.

I always laugh at this cartoon by my friend Sandy Huffaker, about the taste of editors and publishers when it comes to cartoons today: 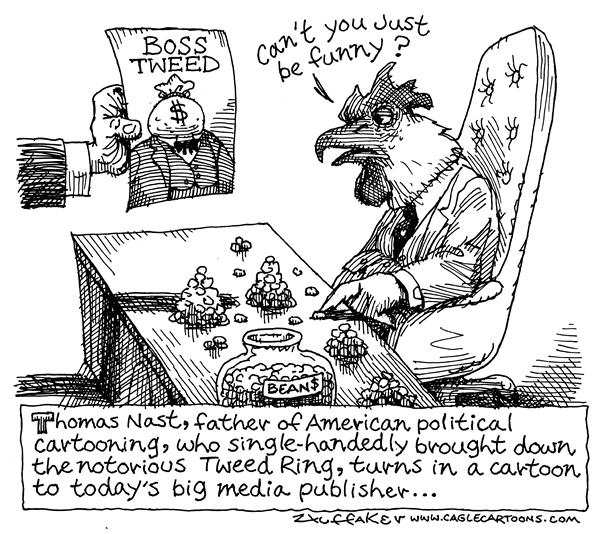 Happy birthday to my favorite cartoonist ever. He is the reason I’ve always followed editorial cartoons. I didn’t know he was German-born, my history books never mentioned all that much about him besides a few cartoons.