I’ll be a special guest at the “Red Man” cartoon festival and competition in Guiyang, China, from the 20th through 25th of November – in a couple of weeks.  If you’ll be in Southern China, stop by.  I’ll give a speech and be on their contest jury.  Also there as special guests and jury members are my cartoonist buddies, Ross Thompson from Britain and Marlene Pohle from Germany.

Sorry to be so slow about posting my new cartoons – I’ll catch up now.  The newest one is this cartoon about the Nazi stolen art treasure that was found last week in Germany.  Given the subject matter, it may be better in grayscale.  What do you think? After I finished this and sent it out, I had second thoughts about the color, and I did this revised version, starting with a nasty sepia-tone and moving up the saturation to the last panel.  I think it is better, so I sent out a revised version.  It makes the older panels seem older, and nastier. 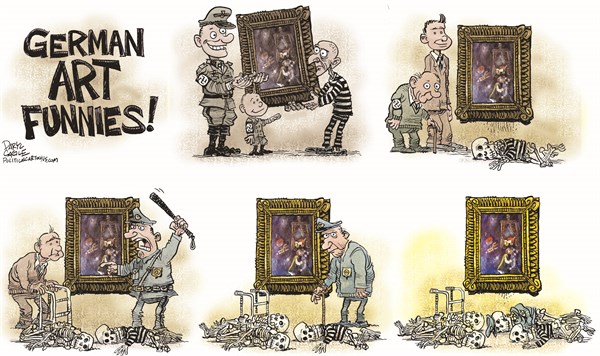 I heard some pundit describe Obamacare as a “heavy lift” for the president, which got me thinking about this caduseus cartoon … I’m trying to go lighter with my colors, and have a little bit of texture in everything.  Bad printing darkens everything up so much, many cartoonists are shocked to see how muddy their cartoons look in print.

I did two versions of this next “X-Ray Specs” cartoon about President Obama and his intrusive spying, which made Germany’s Angela Merkel angry when she learned that the NSA had been tapping her cell phone for years.  It should make most Americans angry too, at lack of deference shown to our privacy rights by our paranoid, overeaching government – so I drew the Statue of Liberty as the victim of the X-Ray Specs too.  Perhaps our young readers are too young to know, but there was a time when there was an ad for “X-Ray Specs” in every comic book – and we all read comic books because there were no video games. And no cell phones.  And we had manual typewriters.  I’m so old.  OOooh. Here are the X-ray Specs in SPANISH! 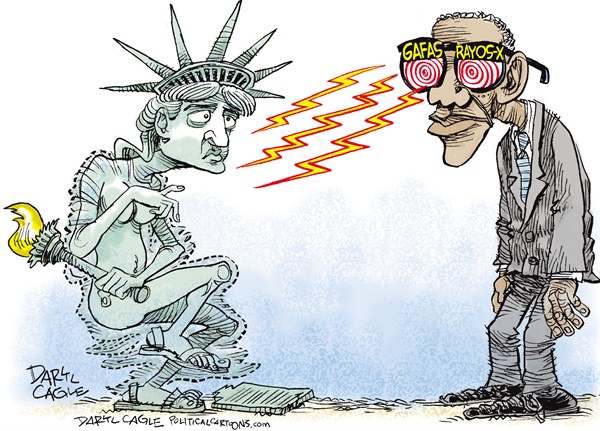 The troubles with Obamacare’s roll out, and lousy web site, have been great fun for the Republicans – so I drew them dancing on Obamacare’s and Secretary Sebelius’ graves, a bit early. The recent election didn’t go too well for Tea Party candidates and moderates stole the day. I was interested to see how the liberal cartoonists all turned so quickly on Obama when the Web site was bad. Here’s my bad Website cartoon. This is one I missed from way back when we had the government shut-down.  It seems so long ago now – Republicans have had some good days with Obamacare’s troubles since then.  Times change fast.