Our conservative cartoonist Gary McCoy is no stranger to controversey. After Rush Limbaugh called Sandra Fluke a “slut” for defending President Obama’s healthcare policy forcing insurance companies to cover contraceptives, McCoy drew a harsh cartoon about Fluke that seemed to set the internet on fire: 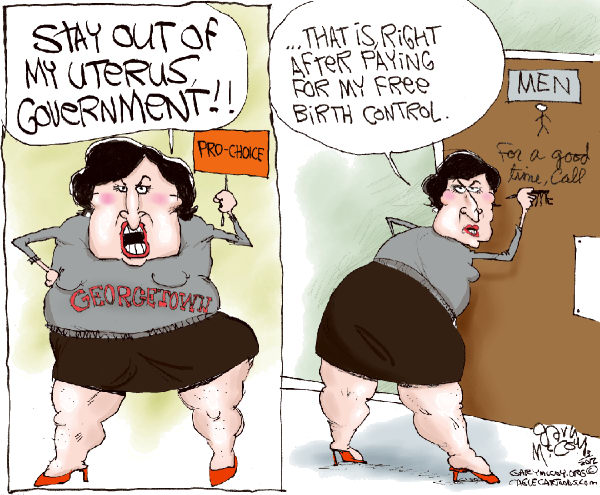 Following Fluke’s address to the Democratic National Convention last night, McCoy has drawn another harsh cartoon about the Georgetown Law School graduate that has riled up our readers and been criticized as misogynistic: 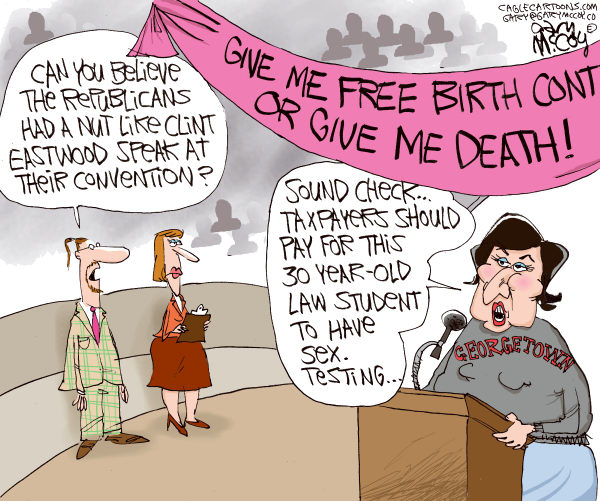 I asked Gary to comment about the cartoon, and here’s what he sent me:

Why is it that a group of people so adept at filling out welfare claim forms while simultaneously watching Family Guy, and able to ignite an American flag using only a pair of reading glasses and two, foot-long strands of underarm hair, are so lost when it comes to understanding a simple cartoon? My recent Sandra Fluke cartoon seems to have infuriated many of the same crowd who popped blood vessels over my last Fluke cartoon, and are just now hanging their Anger Management Class diplomas on their bedroom walls.

To me, it’s hilarious that the left was so incredulous at Clint Eastwood’s RNC speech, in which he, in improv-like fashion, mocked an imaginary President Obama sitting in an empty chair onstage (a perfect metaphor at that.). Yet, they see nothing wrong with inviting for their convention, a divisive, hard-core, pro-abortion ‘women’s rights advocate’ who, despite what her camouflaged congressional testimony held, has in fact pushed for government subsidized (i.e., taxpayer funded) birth control and contraceptives.

And for those whose definition of a misogynist is anyone who criticizes an extremely ideological feminist who complains before the nation that despite attending Georgetown University on a $40,000 scholarship, she can’t afford nine-dollar-a-month birth control, I can only say, shave your armpits for crying out loud! You’re blocking my view.

Here’s a sampling of our readers’ thoughts:

Jerry Chandler: Since her testimony was about medical issues and this cartoon still flogs the lie told by the right about what she said – Foul.

Sherry Russell: Why is a beautiful young woman portrayed as Bella Abzug?

Mike Villwock: While he didn’t completely quote limbaugh in this cartoon by avoiding the use of the word ‘slut’, he leaves no doubt of his low opinion of women by suggesting that those you use birth control are out there whoring it up.

Keith Lewis Simmons: It’s not funny because the issue isn’t all about having sex, unless you’re an ignorant rube. The truth is that hormone therapy is life-saving for many, many women. And men. (See, that’s funny. Not insulting to women’s health, just their psyche.)

Daniel Shrader: Did any of these conservatives actually listen to this woman’s testimony, or did they just get all their info from the fat ass Limbaugh.

Bob Flisser: McCoy is one of the finest minds of the 12th Century.

Julie Slapyawitmah Palm: Heath care for men – totally fine and not worth mentioning, even when Viagra is included. Health care for women – paying people to be “sluts,” as Rush put it. Misogyny.

What do you think of McCoy’s cartoon – fair or foul? Comment below or drop us a line on our Facebook page.

McCoy is stupid. He just can't see the bigger issues regarding women's health care. I find his cartoons offensive, showing he is a very extreme right-winger with no not care for the health of half this country's population (women).

Oh my…I'm a long-time reader of Cagle's and appreciate comments from both sides of the fence. That's fair and balanced discourse, albeit in a humorous fashion. And sometimes it's those little bites of comedy that we remember more than the actual discussion. Whether we want to or not.

But after reading Mr. McCoy's response to his own critisism, and how quickly he turned to juvenile name-calling and misguided hatred, makes me reconsider him as a comeptent commentor of our political jungle. His spouting resembles the kids from South Park – a misguided, toddler-level tantrum that is parallel to the most extreme fringes of our society. In other words, he sounds like an angry, ignorant internet troll. Most of us come to these cartoon for the lighter side of a hard battle for understanding, and Mr. McCoy's response proves to me that he has way too many personal issues to be able to handle an objective view.

I won't be reading his cartoons anymore.

I like the balance that Mr. McCoy and the other conservative cartoonists bring to the page. If it were not for them, the whole cagle site would be tilted on it's left side.

Ms. Fluke loves playing the victim almost as much as she loves the publicity. And the Dems will roll her out at every opportunity to play it up. She's the new Monica without the Presidential money-shot blue dress.

Even better than the cartoon is the controversy stirred up and all the comments. I assume this was the goal in drawing the cartoon? Way to go!! Great opportunity to skewer the other side. I've learned in my old age to just ignore stuff with which I don't agree rather than getting hemroids over it. I'm sure whatever nasty comments you got will only reinforce your opinions anyway. I send your cartoons to one of my GOP buds knowing he will like it.

Gary is right on the money!

What most people do not realize in this birth control debate is this as with most medicines…there are dual purposes. Example my migraine medicine is also used to treat depression & epilepsy. There are 2 different co-pays on it. One for depression, one for for epliepsy/migraines. The co-pay for depression is HIGHER! My doctor submits the paperwork for my medicine under the code for migraines so I get the lesser co-pay.

All the doctors office needs to do is use the proper billing & coding. Use the proper code for health purposes the birth control is free/reduced etc….use the code for restricting reproduction and its a different pay scale…simpe really.

I thought it was sophomoric and in poor taste.And he balances out all reason and humanity of the left.

If you can't draw, you have to be able to write a good point.

Gary McCoy can't do either.

Lynn said: " Use the proper code for health purposes the birth control is free/reduced etc…." that's if you have a decent health insurance plan. And the regulations Sandra was speaking in support of will make sure that it is covered.

6 years ago I was having menstrual issues, bleeding non-stop for 2 months straight, and was diagnosed with PCOS. My doctor prescribed $50 a month birth control pills. Since I hadn't had sex in years, I took them for a couple months, then decided it wasn't worth bothering with.

Not much later I was diagnosed with diabetes, which was related to the hormonal imbalances of PCOS. And now I'm having periodic stabbing pains on one side of my abdomen, also probably related to untreated PCOS.

Given that diabetes is a massive health crisis in society, shouldn't birth control pills to treat PCOS (aka insulin resistance) and help prevent diabetes be a priority?

Just a reminder that this guy tried to walk back his monstrous characterization of Sandra Fluke by claiming it was just a generic woman in his previous tantrum filled rebuttal to criticism of his "work".

"And one major detail that the press, and most of the people spewing hate at me didn’t bother to notice or acknowledge, is that the woman in my cartoon A) doesn’t even look like Sandra Fluke (According to many of the people who critiqued me), and B) Isn’t even labeled Sandra Fluke. So basically, it’s a generic woman…"

In what way? Tell us more.

Gary, Williard Romney, the Tea Party and the Republican Party deserve each other.

The really sad part is it's Daryl who's doing the real pandering by showcasing Gary's scribbles and even soliciting his comments and responses.

The purpose of satire is to expose lies and hypocrisy. Cartoons which repeat lies and distortions are not satire but crude propaganda, using the excuse of "cartoon" to publish bigoted assumptions and opinions.

It's like when Rush makes a racist comment, then defends it as "a joke." Racist jokes are funny…………….to racists; mysogynistic humor is funny to men who fear/hate/revile women.