On Thursday, the Supreme Court will rule one way or another on the constitutionality of President Obama’s health care reform legislation.

Rarely are political cartoonists given a heads-up like this prior to a big news event. Normally, we draw two types of cartoons – breaking news, like the death of Osama bin Laden or the BP oil spill, or cartoons on evergreen topics, like money in politics, global warming and the right versus left divide.

On the rare opportunities political cartoonists have a leg-up on a news event (like on an election night), it’s common to draw two cartoons prior to the outcome, in order to make the print deadline for the next day’s newspaper.  In the digital world, this becomes even more important, as a thought-provoking cartoon drawn ahead of time can hit the zeitgeist quicker and spread like wildfire. It reminds me of big sporting events, where both teams have championship  t-shirts printed, but only one gets to wear them after the game. The losers’ gear is packed up and sent overseas to be given away as charity.

David Fitzsimmons, the staff cartoonist at the Arizona Daily Star (whose cartoons I syndicate through Cagle Cartoons), has filed his two cartoons about the health care ruling. Here’s his cartoon if the court rules that the plan is unconstitutional: 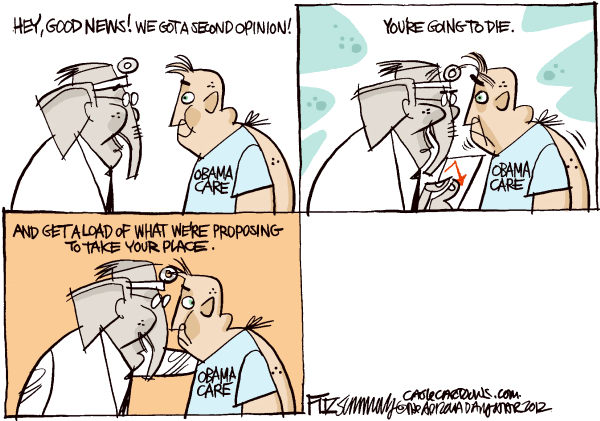 And here’s Fitzsimmons cartoon if the court rules in favor of the law: 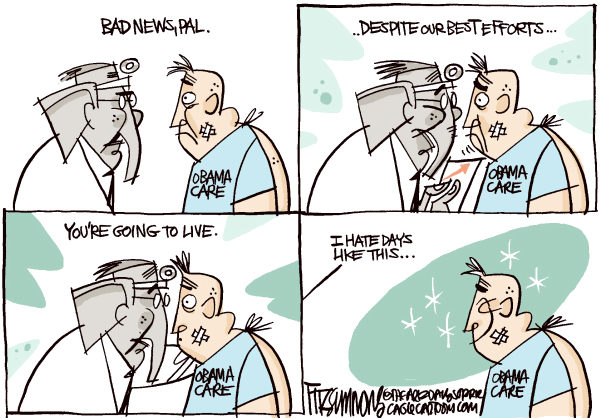 One reply on “Cartoonists Prepare for 'Obamacare' Ruling”

Too many people want someone else to pay their way. I am tired of it. I will pay for myself. I don't need some commie bastard in DC telling me how to spend my money. Screw all you lazy liberal POS jerks. Get a job. Quit having more kids that you want me to pay for. Quit your drugs and booze. GET OFF MY BACK!