After posting this cartoon about the evil, greedy Goldman Sachs calling their clients “Muppets,” I learned that the Muppets actually were clients of Goldman Sachs.

Apparently, back in 2003, the family of Muppets creator Jim Henson was advised by Goldman on buying back all the characters from a merchandising company:

Brian Henson, son of the late Jim Henson, announced that he, his sisters Lisa, Cheryl and Heather, and his brother, John, have signed a definitive agreement to acquire The Jim Henson Company from EM.TV & Merchandising AG for $78 million in cash. Upon completion of the transaction, all five family members will serve on the company’s board of directors, and Brian and Lisa Henson will be actively involved in the company’s management.

Too bad there was never a “vampire squid” muppet. Here’s my cartoon: 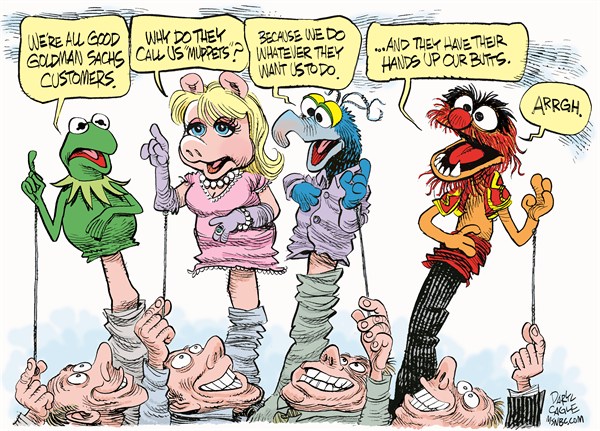