I’m very pleased to announce that we’ve added the brilliant cartoonist Bill Day to our stable of award-winning syndicated cartoonists at Cagle Cartoons.

Bill will draw three cartoons a week for us, along with a local cartoon each week about Tennessee, which we will syndicate to nearly 900 newspapers world wide.

Bill is a two-time winner of the RFK Journalism Award in Cartooning, and a five-time winner of the Green Eyeshade Award from the Society of Professional Journalists. He has also been honored with the National Headliner Award, the John Fischetti Award, First Amendment Award, New York Newspaper Guild’s Page One Award, National Cartoonists Society’s Division Award for Best Editorial Cartoons and James Aronson Award for Social Justice Journalism..

The defense of the oppressed and their condition is a deep and eloquent theme in his work. “I have great fun drawing and using humor in my cartoons,” says Day. “But when a terrible injustice occurs, I’ll use the most powerful images possible to address it.”

Here are some recent cartoons by Day: 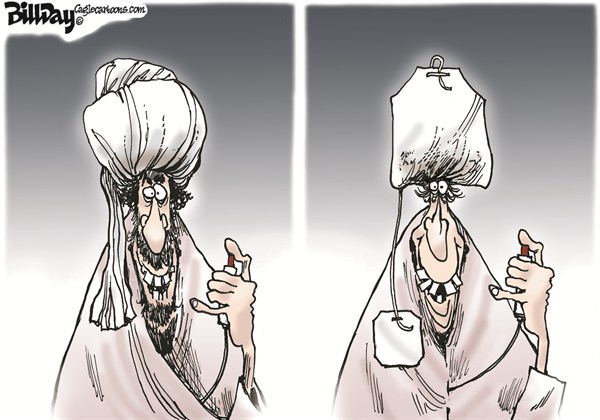 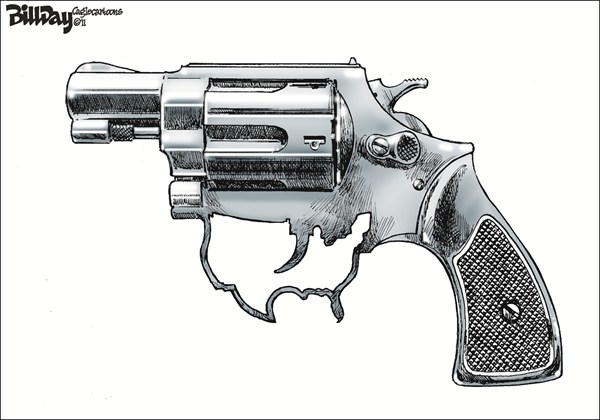 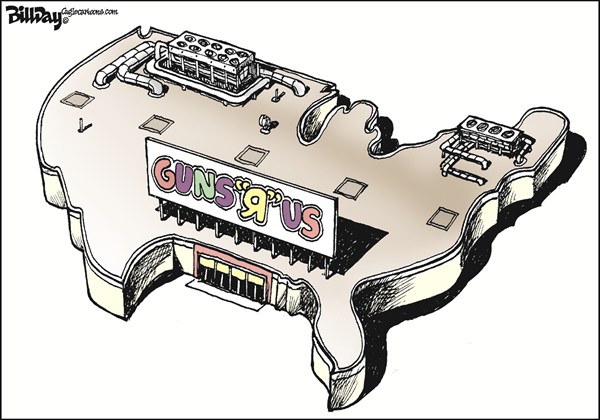 Wow, the radical left with its disarm the population and be like China, Russia and other dictatorships is at it again. Their spend us to the poorhouse philosophy is so sad. Even Putin and the ChiComs are laughing at our debt. But with reservation and hesitation in that we owe them so much.Aw heck, raise working peoples taxes, raise taxes on everything so the Dem liberals can use it to buy votes from slugs who would rather suck the public teat than work. oh, and welcome Comrade Day.

Ray – have al look at the red ink cartoon again.  Don’t you get the point?

What is that arab one at the top all about?  I don’t get it.

I don’t get the point of the cartoon with the guy with the headpiece and the strange teeth.

Sooner we realize the radical agenda of a protest movement Tea Party bent on setting into motion the decline of a nation for a wealthy few the sooner we recognize it as a movement with eloquent, fluent, articulate, expressive bomb throwers backed by a phone tapping opportunists like Rupert Murdock and paranoid Roger Ailes.

terrific addition- you sorely lacked cartoons from the leftist perspective

You forgot the Koch brothers – practically architects of the “grassroots movement.” Check out the recent NYer article on them.

Keep telling you students should be allowed “Conceal Carry”.

Nah, teabaggers are into that perverted sex thing. Ask your good buddy.

They do not have good dental insurance.

Why “concealed”?  Only a C—— S— would be so ashamed that they would want to conceal.  If someone feels a need to carry they should have the confidence to strap a gun to their hip and let everyone know they are carrying.  Anyone that doesn’t have the confidence to do that and withstand the stares should not be allowed to have a gun.  If you want carrying to be a hindrance, don’t depend on the bad guys to guess whether you’re carrying.  Let them know for sure that you are carrying and want him/her to know that you are ready to stop any of his/her actions.

I just can’t see why we make laws to allow cowards to carry.  If anyone is such a coward they are only going to react rather than think about the use of the weapon.

C4 to the economy of the nation.

I am good with open carry, but many faint of heart cringe at that idea. I guess too much of the old west mentality. Besides, just the thought that others could be packing would be a very strong deterrent.

As we are seeing today. Down 335 points on fears that Spain and Italy are ready to implode. Glad I set sell orders last Spring when the DOW hit 12K.

Nah, in the Spring of 2008, we went by “Common Sense Coalition”. I think it was that trader on the chicago board of trades that said we were the modern day TEA Party. Most right thinking people were completely unaware of the sick gay meaning. Bet you knew though.

Is that your special friend gooffy?

Most likely the practice he prefers in the privacy of his own home. I certainly hope he doesn’t do it in public. That would be pretty gross.

wanna see an ignoramus,look in the mirror pal

dont feel bad neither do many americans.terrorists can be homegrown and teabaggers as well as muslims.oops, did I blaspheme? good,I meant to.

Yep, nidal hasan and that pfc last week come to mind. However as paul grubman thought with Tucson, and Mayor bloomberg surmised with the Times Square wannabe, those perps were not affiliated with any TEA Party groups. To date, we have kept it above board, and cleaned up all our trash at events throughout the nation. It is the least that responsible people should do. Did you happen to see the mess left by those who attended the jon stewert and stephen colbert event?

was it as big as the mess Bush left?

Much bigger. Why I even think President Bush left all the “O” on the WH keyboards when he left office. The park service was dumbfounded as to how so few could leave so much. Guess it goes to their upbringing and lack of individual responsibility.

never have so few done so much to so many

Possibly why barry increased the number of czars and advisors. He wanted to spread the blame.

never have so few done so much to so many

Most the left doesn’t want to disarm any qualified citizen who is willing to be properly licsenced and does not insist on having enough firepower to make the Waco Compound look like a boy scout camp firing range.

We’ve got the right to bear arms, just like we can own a car and drive it.   But I’m sure you wouldn’t want someone untrained and unqualified to operate a Tractor Trailor tailgating your car on the interstate.

Another problem is the rally cry that more guns are a solution to our problems or that the Liberals are going to take away your guns.  I think much of the recent anti-gun stir on the left is a direct reaction to pro-gun pushes on the right (the recent article on here from Michael Reagan comes to mind).

Fact of the matter is in most places where people wind up being attacked by someone who’s gone off the deep end, Firearms, concealed or otherwise, are prohibited.  (namely most places of employment and public institutions).  I would assume my employer’s policy of “no weapons in employee vehicles on company property” is likewise more the “rule” rather than the “exception”.

Of course that’s only my observation, North Carolina’s concealed carry law clearly states that you cannot take a concealed weapon into a building that displays a “No Concealed Weapons” sign.

I grew up in a no guns household, as my mother felt having a  gun was not likely to help you, either you wouldn’t have it ready when you needed it, or any attacker would become more violent.   I don’t hold that view, but only because I’ve actually had some experience and training in handling weapons.

I’m able to load, shoot and hit my intended target, I also know to always treat any weapon as if it’s loaded and ready to fire.  I say weapon and not gun, because I own a crossbow, knives and swords, as I used to teach swordfighting and do archery in a medieval recreation group.  My girlfriend owns several handguns.

No one is going to barge in and take your guns (unless you’ve got some crazy in your neighborhood out to rob you).  It would be illegal to do so.

But I do agree there’s no reason why my neighbor should have a room full of AKM rifles and enough ammunition to start WWIII and I really would rather not have anyone who isn’t in the military or some form of defense / police group have access to Assult weapons.

Bill Day’s cartoons are an obvious reflection of his solid leftist leanings. These “cartoons” drastically misrepresent any part of reality as most understand reality to be…and I don’t mean anything like that pseudopsych ‘pop’ culture rubric of ‘perception is reality’…(but maybe that’s the point for Liberal ‘thinkers’, show all how mistaken they can really be as a means to generate further anger at them and increase the growing flow of real thinkers and voters into the more conservative mode of rationality).

Pretty funny stuff.  We like the 2nd Amendment, and we don’t like to know that anyone might be abusing that right to make a lot of money.

I’m so glad to see Bill’s work again.  Years ago, maybe 15-20, he was a solid anchor to the Detroit Free Press.  A strong mind and a caring soul lives on.

I guess integrity has different meanings among artists. I would never question his integrity and lament the integrity of those who would.