Here I am with my cow, Josette. I’m holding the St. Just porcelain statue depicting their logo that they give to grand prix winners.

I just got back from the grand editorial cartooning festival in St. Just le Martel, France where I won the grand prix, the “Prix de l’humor Vache” award, which was an actual cow, named Josette.

The “Salon de St. Just, ” in its 32nd year, draws cartoonists from around the world to a tiny town near Limoges.  The townspeople have adopted the cartoonists and hold a party that stretches over two weekends, in a grand cartoon museum they built in the middle of cow country.  Most of the cartoonists stay in the homes of volunteer villagers – the entire event is put together by townpeople  Cartoonists usually come for only one weekend of the festival, splitting the crowd between what becomes two different weekend groups of roughly 120 cartoonists each.

This was my second “Salon,” last year I went with our knuckle-dragging, conservative, “Tea Party” cartoonist, Eric Allie, who was a strange beast to the French.  This year I went with three liberal cartoonists, Pat Bagley of the Salt Lake Tribune, Steve Sack of the Minneapolis Star-Tribune, and Bob Englehart of the Hartford Courant for three days of open bar and schmoozing with our international colleagues. Here I am with my Cagle Cartoons colleagues, dubbed “Cagle Cowboys”, from left, Josette, Pat Bagley, Me, Bob Englehart and Steve Sack below.

My festival friends tell me that a cow is usually a placid animal, but sometimes the cow will get annoyed and give a swift, painful kick as a surprise to an unlucky bystander; this contributes to the idea that the cow is a little sneaky, nasty and unpredictable.  The “Prix de l’humor Vache,” the grand prize they gave me, is described as an award for “caustic humor.”  “Humor Vache” (funny cow) rhymes with “Amour Vache” (love cow, or more accurately “rough love”) a French idiom for a love affair that is nasty, consisting of harsh words and arguments.  In France, to refer to someone as a “vache” (cow) is a little bit nasty.  In contrast, on the first Saturday of the Salon, they give out the “Humor Tendre” (Tender Humor) award, which is a sheep, given to a sweet cartoonist such as a children’s book illustrator.

The Limoges area is proud of their cows, which are raised for beef and are all a warm brown color.  The cow is the symbol and mascot of the Salon.  Every year, the “Prix de l’humor Vache” cow is named “Josette” and is actually given to the winning cartoonist.  At the ceremony, the mayor of St. Just, Gerard Vandenbroucke, awarded Limoges porcelain cows to my three American compatriots, dubbing them “Cagle’s cowboys.” Bob, Pat and Steve, who can also claim to have won cows (although, not real cows) took their little cows around to all the other cartoonists at the Salon to sign; it was charming. Typically, the winning cartoonist is expected to take a cash award (I still don’t know how much) in lieu of actually taking delivery of the real Josette, who would be difficult to check on a plane and would likely be an unpleasant roommate in my tiny, Nashville apartment.  But, they make it clear that the cartoonist really won a cow and could actually take the cow if he or she chooses to, and there are stories of cartoonists in past years choosing to take the cow.  I’m told that are some amusing movies of a past winner taking his cow to Paris, trying to bring the cow on the Metro, and taking the cow up the Eiffel Tower.  If anyone can find these movies online, I’d love to take a look.

Part of winning the grand prize cow is the obligation to do the art for the poster for the next Salon.  The poster this year featured a lovely Degas-like ballerina cow. The festival people then dress a cow sculpture, in the entry to the museum, to match the cow on the poster.  My plan is to give the cow on next year’s poster a very elaborate costume that will be a unique challenge for a St. Just volunteer to create for the cow statue.  Right now, I’m thinking of doing the poster cow as Marie Antoinette with a huge, elaborate, flowing gown.

Here’s Bob Englehart with the cow statue at the entrance to the exhibition. The cow is dressed to match the poster which is a ballerina this year. Next year I’ll be doing the poster and I plan to put the cow in a very elaborate costume that will be a challenge for St. Just’s volunteer seamstresses.

The whole event in St. Just is a lovely boost for our beleaguered editorial cartooning profession which is suffering in France as it is here and around the world with newspapers declining everywhere.  I’d love to see some of the great French attitude about the value of editorial cartooning rub off on other parts of the world, like America, which treats cartooning as a second class art form.  I can’t imagine a whole town in the USA choosing to build a municipal cartoon museum, opening their homes, and pitching together to cook dinner for hundreds of editorial cartoonists – and, of-course, a nine day open bar would be unthinkable in America.

Below is a scan of the Limoges newspaper front page and interior story from the day after I had a cow. I’m happy to announce that we have added my cartoonist buddy, Steve Sack, of the Minneapolis Star-Tribune, to our newspaper syndication package.

Steve has been one of my favorite cartoonists for decades. Steve’s style is deceivingly cute and sweet, masking some nasty, hard-hitting commentary.  Here are a few of my favorites from Steve’s last year.  I’m still laughing at “Rice Konspiracies” below.

This one surely made Republicans growl … 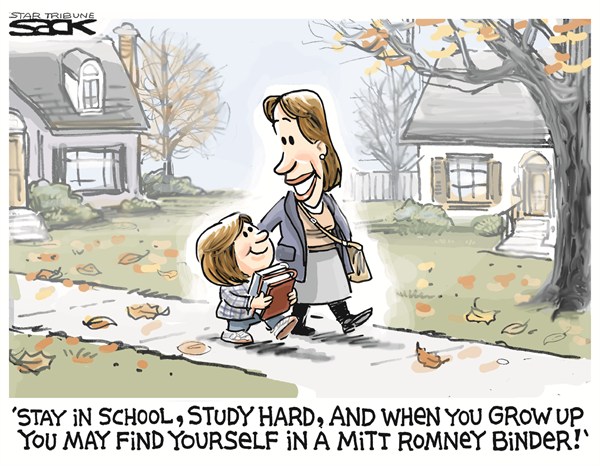 Looney Michelle Bachmann is a local favorite for Steve in Minnesota … 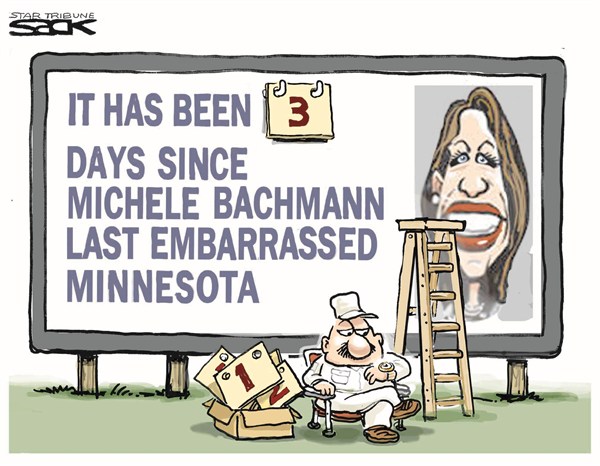 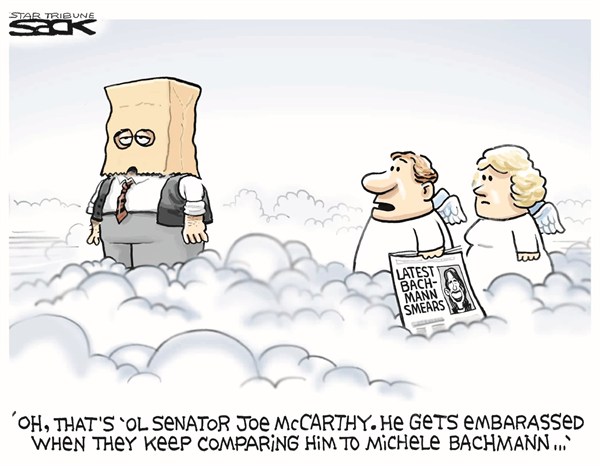 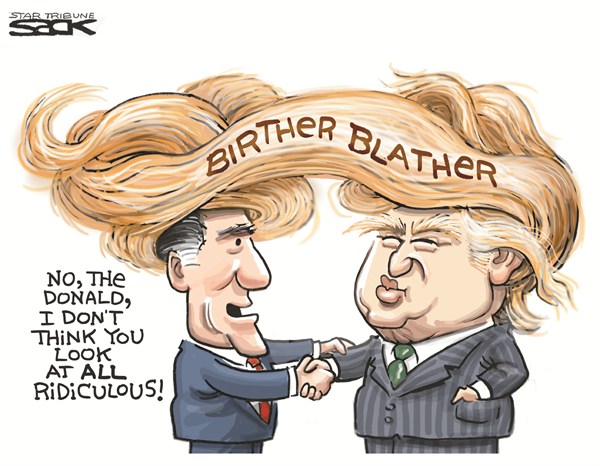 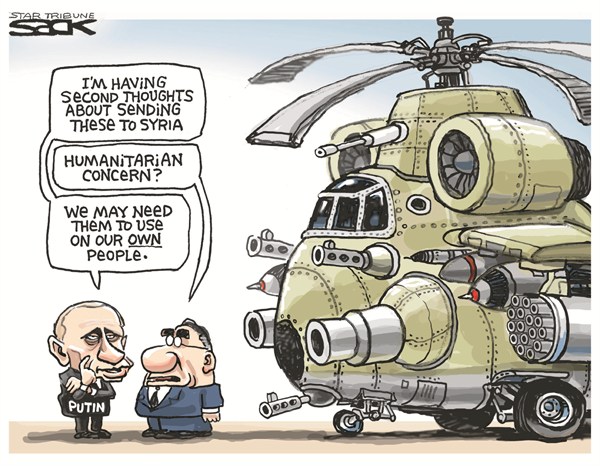 I’d suggest that a cool way to spend New Years Day is a stroll through our
Steve Sack cartoon archive.  It is great fun.