Here are my latest three cartoons – hot off the drawing board and Wacom tablet!

The Supreme Court heard two gay rights cases this week, California’s Proposition 8 and the Defense of Marriage Act. The pundits seem to agree that these cases will likely be decided by 5 to 4 votes, so I drew the four, ugly conservatives on the court angrily brandishing their gavels at the cowering gay couple on the cake. Fortunately, the ugly conservatives on the court are also the easiest justices to caricature!  Here is my rough sketch. Drawing caricatures like this is so much easier now than it was years ago! All I have to do is type some public figure’s name into Google Images and I get a page full of great thumbnails. In the old days I had to cut photos out of newspapers and magazines and save them in a “morgue” in case I ever needed to draw a caricature. Technology is grand. I draw everything at about 11″ x 17″ on vellum in pencil, and I scan at high contrast so it looks like ink. Then I color it in Photoshop with my Wacom tablet.  Here is the color version. Next I drew a Republican elephant flogging himself as his intolerant views about gay rights do nothing but give him a sore back. Here is the rough sketch. And here is the finished drawing, in pencil on 11″ x 17″ vellum, with the gray tones added in Photoshop. It is better if a drawing holds up as just line art with no gray tones – but sometimes I have to resort to gray. This one needed a little tonal substance. Here is the color version. The most recent cartoon is another riff on an art masterpiece – these seem to be the most popular cartoons I draw. This one is based on a famous 19th century print by Japanese artist Katsushika Hokusai, titled the Great Wave off Kanagawa (pictured on the right).

This image made for a popular Yahtzee, in editorial cartoons, after the Japanese tsunami. One thing that is interesting about Japanese prints is that the Japanese read from right to left, so the boats in the Hokusai print are sailing from calmer seas into the big bad waves. Of-course, editorial cartoons must read from left to right, with the set-up on the left and the gag on the right.

I printed out the Hokusai image and sketched a little GOP elephant to the right for my rough sketch. I drew it up like this, then I noticed that the elephant was too big – he needed to be smaller for the wave to look more threatening. Here is the finished line drawing with a smaller elephant. And here is the color version. That Hokusai wave is a wonderful wave! 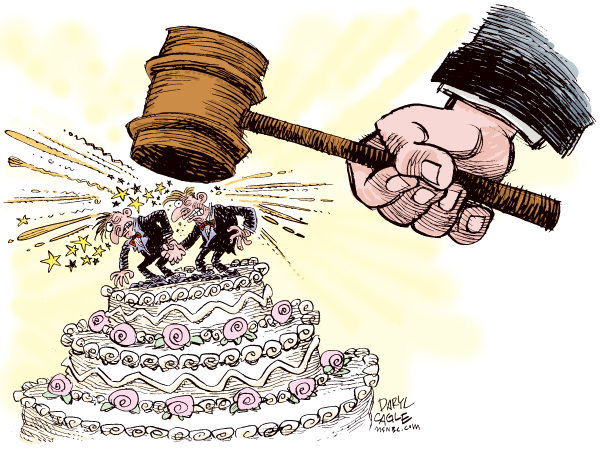