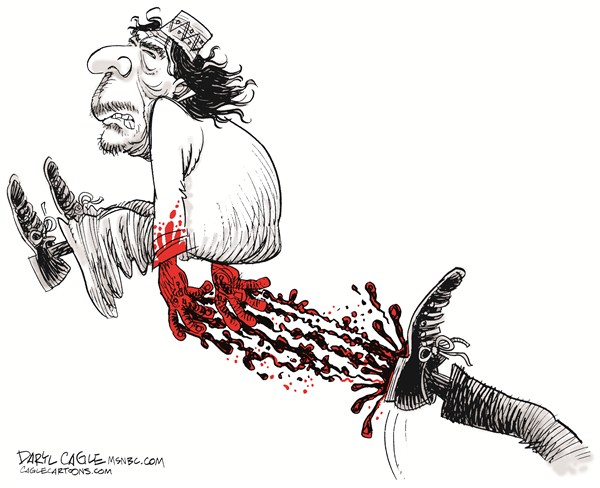 As questions grew about the scope and focus of the Obama Administration’s offensive in Libya, Columbia Daily Tribune cartoonist John Darkow drew the cartoon above, suggesting that the “limited target” that Obama spoke off actually included the removal of Libyan leader Moammar Gadhafi.

But Daytona Beach News-Journal reader Martin Press couldn’t get past what he refered to as the “wildly exaggerated features” of President Obama.

“The caricature… is so disrespectful to the president of the United States that it could have been drawn by one of the nutty “birthers” who infest the media,” wrote Press in an letter to the editor.

We’ve had numerous discussions here about the unique difficulties that come into play when your exaggerating features and caricaturing the nation’s first black president. Is Press right about this Darkow cartoon being “grotesque and racist,” or is he just being too sensitive to race and the art of a political cartoonist to exaggerate the features of his subject, in this case President Obama?

Last week, President Obama ordered the U.S. to begin a military offensive in Libya to establish a no-fly zone and protect civilians from being killed by crazy Libyan leader Moammar Gadhafi. Now, Obama is facing scrutiny from both sides of the aisle who claim the mission goals are both hypocritical and vague.

What do the nation’s best editorial cartoonists think? Check out our new Obama’s War in Libya cartoon slideshow to find out!