Last week, Joe Biden (view all our Biden Gaffe cartoons) got into some hot water when he awkwardly told a crowd during a campaign rally that “Romney’s going to let the big banks once again write their own rules – unchain Wall Street!” adding, “They’re going to put y’all back in chains.”

Well, our conservative flamethrower Gary McCoy responded with this cartoon about the gaffe-prone Vice President: 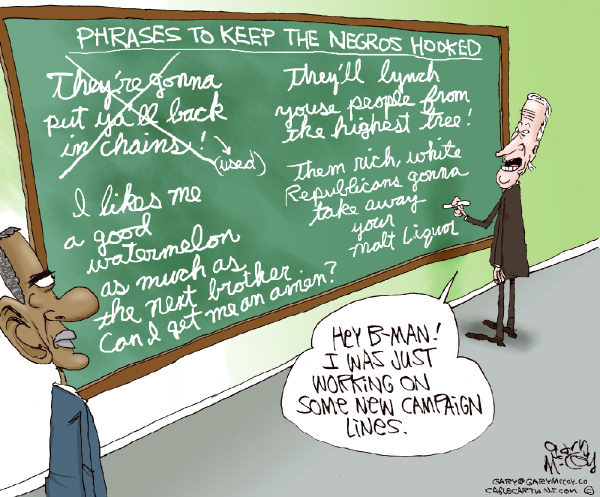 McCoy’s cartoon created a stir among readers, and led to a deluge of comments from our Facebook and Twitter pages. Here’s a sampling of their comments:

Paul Hartzer: Racism under the guise of rebuking Biden’s “racism”.

Jon Hall: Here come the defenders of the Progressive Faith — letting us all know he didn’t mean *those* chains …

Stilton Jarlsberg: I applaud Gary McCoy’s courage in speaking out about this. Racism is NOT acceptable – especially in the mouths of those on the Left who make it into policy.

Mary Lou Quinn: How can (inappropriately) referring to the early history of black americans be, in any way, compared as equal to references of watermelon and malt liquor? Weapons of mass distraction!

Anika Denton: This cartoon is so vile and unfunny. Biden didn’t even make a racist statement, it’s Republicans fake poutrage that made simple-minded people think it was racist.

Good old Gary McCoy. Riding on the coattails of his successful brother.
What would he be without his brother.

When Repubs say stupid shit, you guys are all over them. When Dems say the stupid shit, suddenly it's all "oh, we shouldn't blow things up like this."

What Biden said was pretty damn low. It is hard not to run afoul of Godwin's Law when Biden is making comments like this to get votes. However, then I remember that Biden seems more the thoughtless goon than someone that would say those comments to actually get somewhere. He's YOUR idiot manchild. Keep him away from sharp objects, if you don't want his idiocy made fun of.

Did it ever occur to anyone that Biden may be getting instructions to say things like this because 1) he's regarded as so foolhardy as to be invincible, 2) Barack Obama won't lose the black vote regardless of what his VP does and 3) It's incredibly distracting from the economy, thus easily serving his purposes?