According to his famous comic book origin, Superman was born on the planet Krypton. But in reality, the Man of Steel was created in a Glenville, Ohio bedroom by teenagers Jerry Siegel and Joe Shuster.

To commemorate Superman’s 75th anniversary, Ohio had planned to offer specialty license plates with the famous “S” logo of Superman, along with the phrase “Ohio – Birthplace of Superman.” But plans may be on hold now that DC Comics and Warner Communications object to the wording.

According to the Cleveland Plain Dealer, negotiations between the state government and DC have been amicable, and the state had no issue changing the slogan on the plate. State Rep. Bill Patmon, a Democrat from Cleveland, says the bill to approve the change, once a new slogan is selected, will be voted on in fall and  he expectes no opposition.

There has been a long and contentious legal fight regarding creator rights and the ownership of Superman. In 1975, Warner Bros. agreed to pay Siegal and Shuster a $20,000 stipend each for life, and add a “created by”credit on all relative material. Through the courts, the estate of Superman co-creator Jerry Siegel recaptured half of the original Superman rights in 2008, with the estate of co-creator Joe Shuster set to do the same in 2013. Warner Bros. is currently appealing the ruling.

Nate Beeler, the new staff cartoonist for the Columbus Dispatch (whom I syndicate through Cagle Cartoons), said he understands the branding and intellectual property issues, yet this case feels a little silly to him. He wrote:

“Everybody knows Superman is a fictional character who comes from the fictional planet Krypton and grew up in the fictional town of Smallville. What people might not know is that he was created in Cleveland by the legendary Jerry Siegel and Joe Shuster. The license plate is a nice way of bringing attention to the great cultural contribution of these Ohioans. If the wording is changed to something like “Birthplace of the creators of Superman,” I just hope that DC Comics won’t object by saying, “But Superman’s parents, Jor-El and Lara, were also from Krypton!” 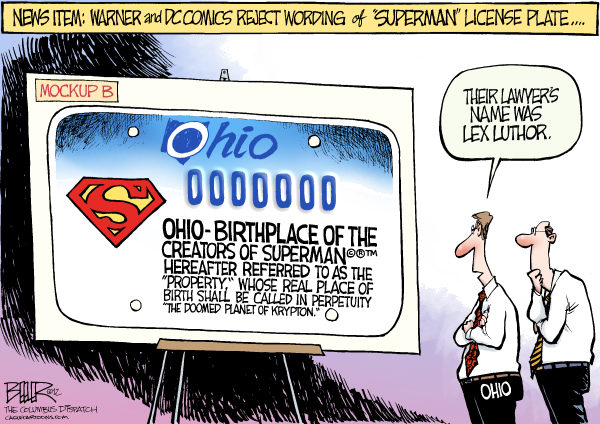 DC Comics lost me when they decided that Superman would renounce his American citizenship. I know he is a comic character, and he is also an icon who has always stood for "Truth, Justice, and the American Way." And if it were not for America, the Declaration of Independence, the US Constitution, and their effect upon the world, that way of BEing would not be spreading across the globe.