There is a tense international situation developing in China surrounding blind activist Chen Guangcheng. Chen, who served time in prison for exposing forced abortions and sterilizations being done to comply with China’s one-child policy, escaped from house arrest early this week and was being given refuge at the U.S. Embassy in Beijing.

Here’s the first cartoon I drew on the subject: 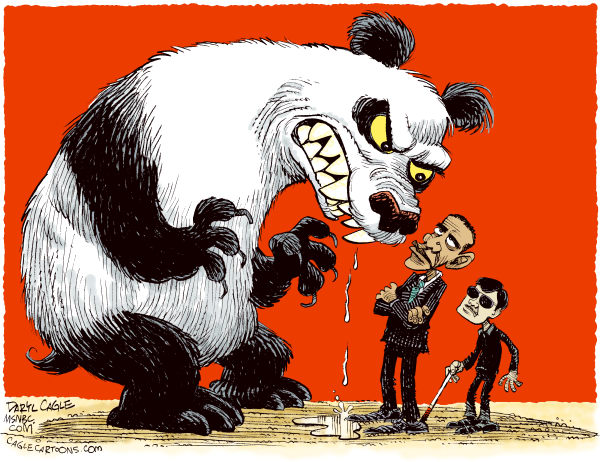 Once the Chinese government found out about U.S. involvement, they demanded that the U.S. apologize for meddling in its affairs, and according to reports, threatened the safety of Chen’s family. According to Chen, U.S. officials promised that at least one representative would stay with him at the hospital where he was being treated for an injury he received while escaping. But once he was brought to the hospital room, they all left, and now have no access to the activist.

The New York Times reported the Obama administration was “exposed to criticism from Republicans and human rights groups that it had rushed to resolve a delicate human rights case so that it would not overshadow other matters on the bilateral agenda,” such as the Iranian and North Korean nuclear programs and China’s currency and trade policies.

So here is my new cartoon on the incident: 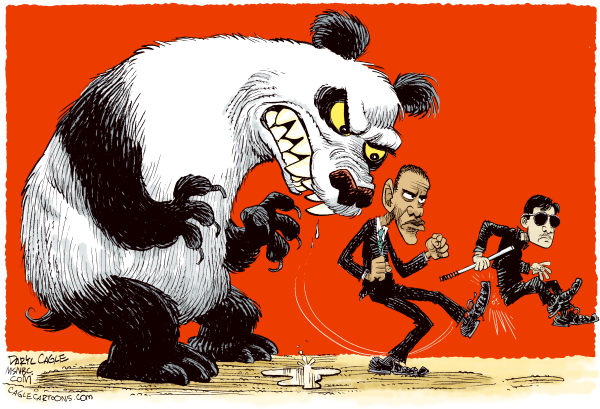 Chen now says he wants to leave China as soon as possible. “My fervent hope is that it would be possible for me and my family to leave for the U.S. on Hillary Clinton’s plane,” he told The Daily Beast.

What do you think we should do? Comment below or drop a line on our Facebook page.

4 replies on “The Case of Chinese Activist Chen Guangcheng”

Let the Chinese take care of China. It is none of our business. Let's get the Hell out of Afghanistan, Iraq, Korea, Germany, and everywhere excewpt the USA. I am sick and tired of us policing the world.

I couldn't agree more.
Too often short-term becomes so long-term that no end is in sight.
We solved nothing in Korea, Viet Nam, Iraq and now Afghanistan.
Will we ever learn?

Wow, ETRedneck, I can't believe I am agreeing with you. The US, with 1/4 the population has far more prisoners than China (or anyone), mostly nonviolent offenders. The US, as the world's leading prisoner nation, should not be telling others how to handle their affairs. This whole thing looks like a set up.
Have US groups funded the Chinese dissident? Is this a way to embarrass China? The US has hundreds , if not thousands, in prison without due process and without charges.

Let's deal with our own problems and work for peace with China and all other nations. Bring all the troops home.