Late last week, Democratic strategist Hilary Rosen unleased a firestorm of criticism on Twitter when she said it was wrong for Mitt Romney to be using his wife Ann as his guide to women’s economic struggles because she “had never worked a day in her life.”

The Romney campaign quickly spun the incient as an attack on stay-at-home moms, creating some cover from the “war on women” moniker Democrats have tagged Romney and the GOP with.

This cartoon by John Cole, the cartoonist at the Scranton Times-Tribune, has received a lot of traffic and feedback, both positive and negative, from our readers… 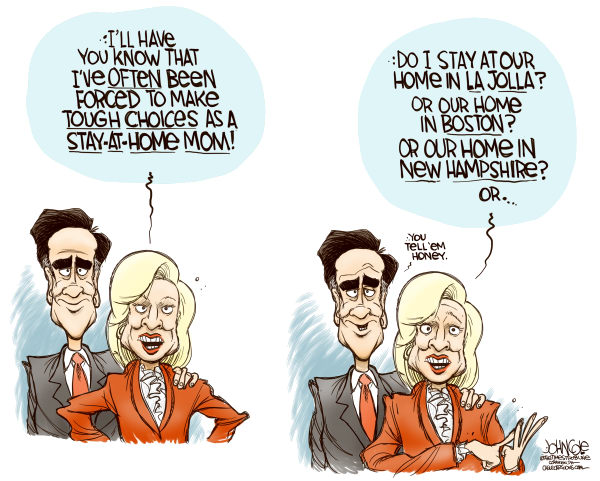 I asked John to comment on the cartoon, and here’s what he said:

Rosen’s comments unleashed one of those tidal surges of political spin that one only sees in an election year. I personally don’t think she insulted stay-at-home moms, but that’s another argument.

What I found and continue to find hilarious are the repeated, stumbling attempts by Mitt Romney (and now his wife, Anne) to portray himself as the Average Joe (and now Josephine). They’re obviously not. That said, I hope they keep the act up; it’s provided great fodder for many a cartoonist.

What do you think of the cartoon – fair or foul? Comment below or leave a note on our Facebook page.