This morning the election is undecided, with President Trump claiming victory and the Biden campaign confident of victory. The lawsuits are starting and the cartoonists are drawing!  Here are the first cartoons about our election purgatory. I expect lots of great cartoons to keep coming in – keep your eyes on Cagle.com! My editorial cartoonist buddy, Randy Bish, recently retired from the Pittsburgh Tribune-Review, the conservative paper in a rare two newspaper/two cartoonist town. Randy is the latest in a long line of cartoonists losing newspaper staff positions –where the newspaper doesn’t hire a new cartoonist.

Randy is a long time contributor to Cagle.com and PoliticalCartoons.com. Here is Randy’s post about leaving his position and a few of Randy’s cartoons – see Randy’s cartoon archive on Cagle.com

In the same year that “Back To The Future” was in theaters, the wreckage of the Titanic was discovered and Microsoft released Windows version 1.0, a young man from Walkchalk walked into the offices of the Tribune-Review to nervously start his first day as an editorial cartoonist.

Since that day, the world has changed in so many ways. Two space shuttles (Challenger, Columbia) and their crews were lost. An American president was impeached.

An iPhone was invented. The nation was gripped by a court trial when a famous athlete, accused of killing his wife, was found not guilty. On a September morning, terrorists took down four airliners and two towers.

During these years, I’ve had the honor of drawing five American presidents.
(six, if you count the drawings that I did of Jimmy Carter back when I worked for the Valley News Dispatch)
I’ve drawn every crooked politician from the time when they worked in Harrisburg or Washington until the time when they went to prison.

In my time at the Trib, I’ve been blessed to have been able to meet the people who were my heroes. One of the saddest parts of my job was having to be the one to draw memorial cartoons of the heroes that we have lost. My salutes to the people who have left their marks on our world became some of the most popular cartoons among readers. To this day, I still have people who ask for copies of my tribute to Snoopy cartoonist Charles Schulz.

I’ve seen my cartoons travel across the world, going to places that I never could have imagined. They’ve been reprinted in textbooks in Europe and found homes in museums. The mother of an American soldier once told me the story of how her son made a poster-sized copy of a cartoon that I had drawn of Saddam Hussein. When the soldier’s unit entered one of Hussein’s palaces, the young man hung the cartoon across the headboard of Saddam’s bed.

My time here at the Tribune-Review will end after September 9, when I will leave to pursue other interests.

I’ve been fortunate to have worked with some great people in the past and blessed incredibly with all of you who have read my cartoons through the years, whether in the paper or online. And now, as I face a new chapter in my life, I look forward to seeing what the future holds.

Any man who can spend over 30 years of his life doing the things that he loves to do is a lucky man.

I cannot begin to tell you just how much your friendship and your support has meant to me.

You have all made my world a better place, and for that, I thank you. 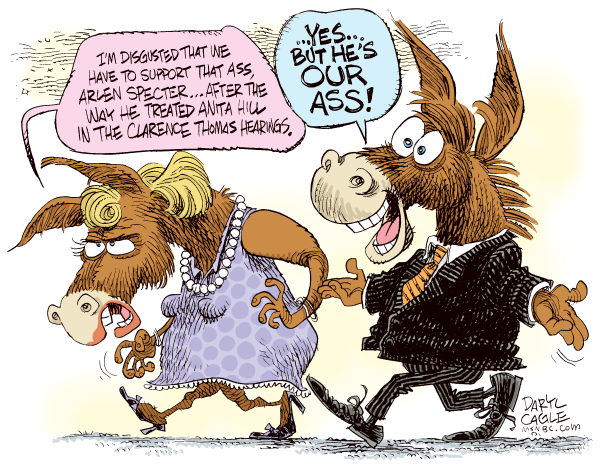