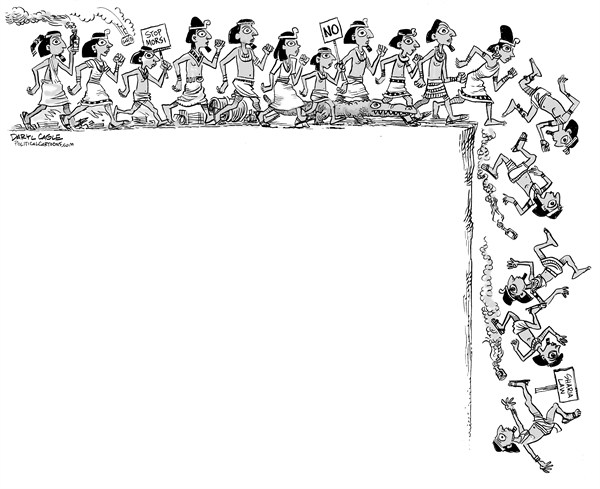 It didn’t take long for the new Islamist government in Egypt to start acting like other nutty Islamic regimes when it comes to cartoons.  The latest wacko religious intolerance comes in response to the cartoon below, by Egyptian editorial cartoonist Doaa El Adl.

The cartoon, published on her newspapers online site, shows an Egyptian man with angel wings lecturing Adam and Eve.  The three are on a cloud beneath the infamous forbidden fruit tree.  The man is telling Adam and Eve that they would never have been expelled from heaven if they had simply voted in favor of the draft constitution in the recent Egyptian referendum.  Some of the supporters of the referendum were quoted as saying a “yes vote” guarantees one a spot in heaven, while a “no vote” guarantees one a spot in hell.  Neither Adam nor Eve in Doaa’s cartoon is uttering a word. In short, the cartoon is critical of Egyptians who have recently politicized religion.

The cartoonist is being sued by Egypt’s new Secretary General for the Defense of Freedoms, Khaled El Masry; he claims that the cartoon insults Adam, who is considered a prophet in the Muslim religion.  Egypt’s Attorney General has ordered an investigation.

This is the offending cartoon. The angel who appears to be a typical Egyptian man, is telling Adam and Eve that they would never have been expelled from heaven if they had simply voted in favor of the draft constitution in the recent Egyptian referendum.

I met Doaa El Adl at the Association of American Editorial Cartoonists convention a couple of years ago in Florida, shortly after the revolution in Egypt.  She was the only woman cartoonist in a large group of Arab cartoonists sent by the US State Department to visit their colleagues in the USA.  In our conversations she was beaming with pride and optimism about Egypt’s revolution and her high hopes and expectations about Egypt’s future.

This is a shame.  Doaa is talented, brave and eager to seek a better future for Egypt – just what Egypt needs right now.  Read more about her case on the Cartoonists Rights Network site.