Donald Trump called off the planned meeting with North Korea’s Kim Jong Un yesterday because of a typical, belligerent statement from North Korea. It was probably a good move to call off the summit; now North Korea is pushing for a new summit instead of the USA being the eager one, which is probably a strategic necessity. Unlike many in the media, I liked the letter that Trump wrote to L’il Kim, especially Trump’s line, “I felt a wonderful dialogue was building up between you and me.” Since I’m cool with Trump’s response, I considered this to be one my my rare pro-Trump cartoons –but my drawing of Trump is unflattering so I doubt that the Trumpettes would see this cartoon as pro-Trump. We have a “Trump Friendly Cartoons” section on the front page of CagleCartoons.com and I didn’t put this one there –there’s just too much anti-Trump flavor, even in my pro-Trump cartoons.

It has taken me a long time to develop a Trump caricature that I’m happy with. Cartoonists are still all over the map on the way they draw Trump, but the long red tie has come to be a common device among almost all of the editorial cartoonists. I love the long, red tie.

Here are some of my “summit called off” cartoon favorites that came in today; this one is by Nate Beeler of the Columbus Dispatch: This one is by Stephane Peray from Thailand: This one is by Marian Kamensky from Austria: This one is by Steve Sack of the Minneapolis Star-Tribune: Cartoons about the Israel vs the Palestinians conflict fall into some general categories; the big one being pro-Israel, which constitutes most of the American cartoons, and pro-Palestinians, which are most of the international cartoons.  There are the “to hell with both of them” cartoons, which are a larger and larger proportion of the cartoons.  And there are the infinity cartoons, that show the conflict going on forever with cartoon symbols like the Energizer Bunny, Mobius strips, M.C. Escher endless staircases and visions of the future with spacey Israelis and Palestinians continuing to fight in a post-apocalypitic far future.  My cartoon today is something of an infinity cartoon. 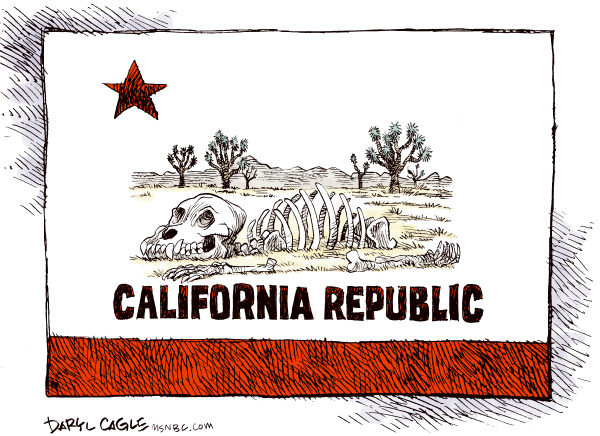