Here is my new cartoon, based on Edward Hopper’s famous 1942 painting, Nighthawks. and the original for comparison. Here’s a little detail, blown up as it can be hard to see on the Web … Here is my previous cartoon, on the trillion dollar coin. 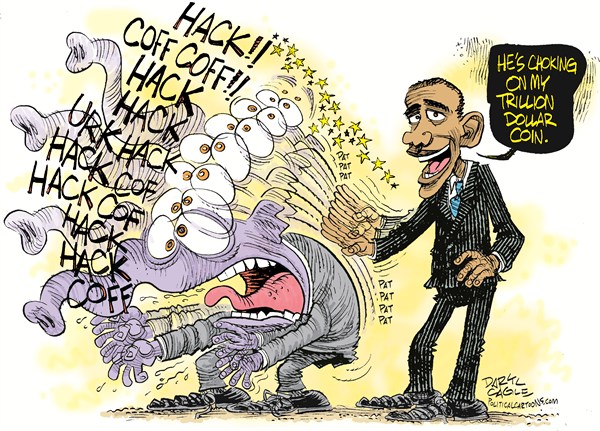 The trillion dollar coin is a great idea, and should be great fun for cartoonists.  This one by knuckle-dragging, conservative cartoonist, Eric Allie, is quite funny. 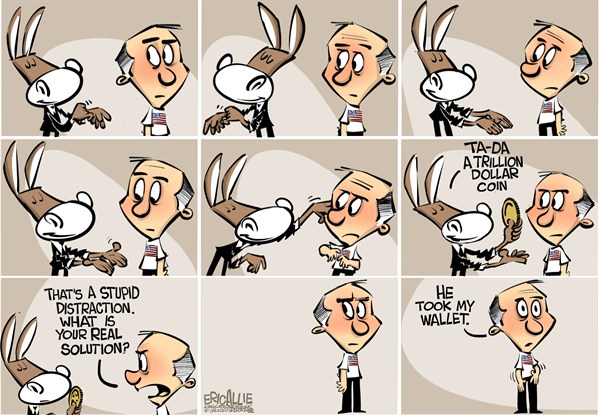 There haven’t been as many trillion dollar coin cartoons as I expected – maybe they are coming soon.

By the way, back when I was working in the toy industry it was a time when toy execs were getting lots of government pressure and press criticism about unsafe toys. I often heard the toy industry argument that many more kids are killed each year by choking on coins than by toys, and the government could fix that easily by putting holes in the middle of coins, as some foreign countries have done.  But nobody cares about unsafe coins and the government was being hypocritical by focusing on unsafe toys while doing nothing about unsafe coins. That’s also an interesting argument with the gun debate, since so many kids continue to be killed by coins, but I’ve never thought of a way to do it in a cartoon, since kids choking on coins (or shot by guns) is nothing anyone wants to see in a cartoon.