Things aren’t looking too good these days for Mitt Romney’s campaign. Gaffe after gaffe has led him to dig a deep hole he now has to try and climb out of… 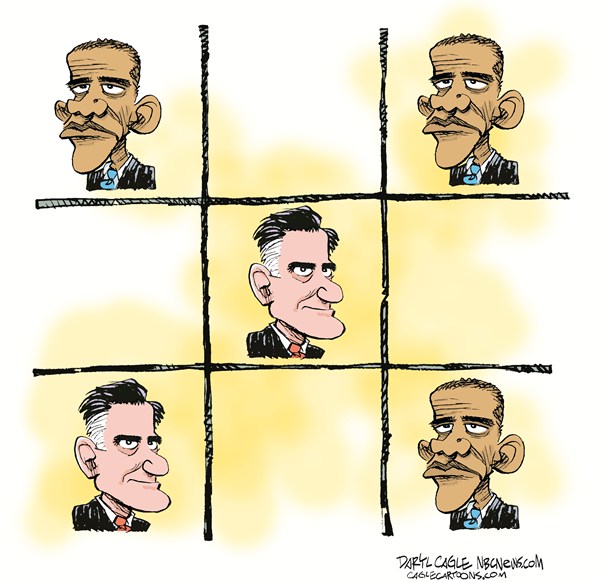 If you tune into conservative media outlets, they’ll tell you the bad polling data is a liberal media plot to keep Republicans from voting… 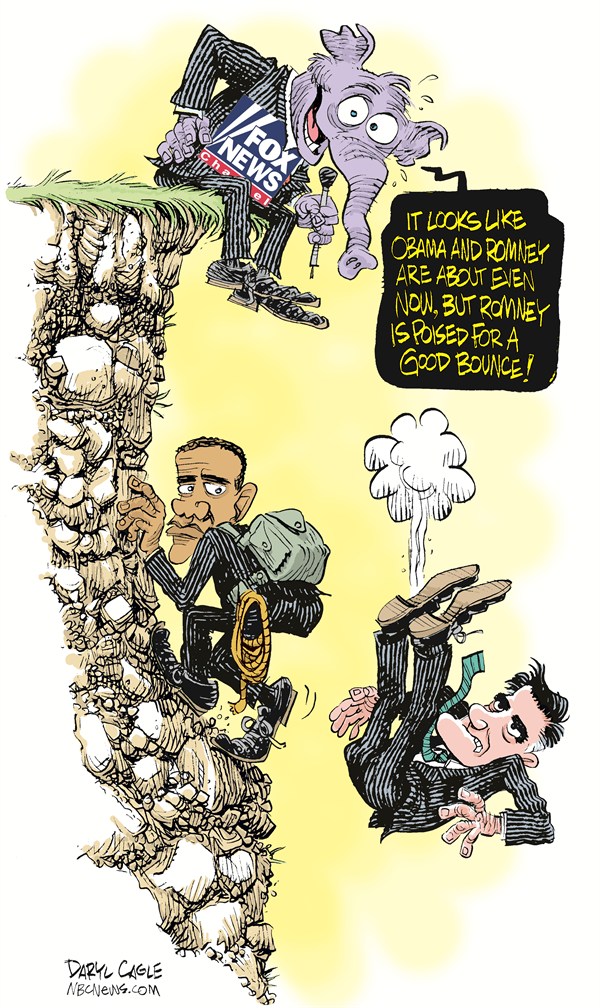 Meanwhile, Romney is still on the hook for telling fundraisers he thinks nearly half the people in the country are “lazy” and feel “entitled” to government benefits, despite all the other taxes they pay… 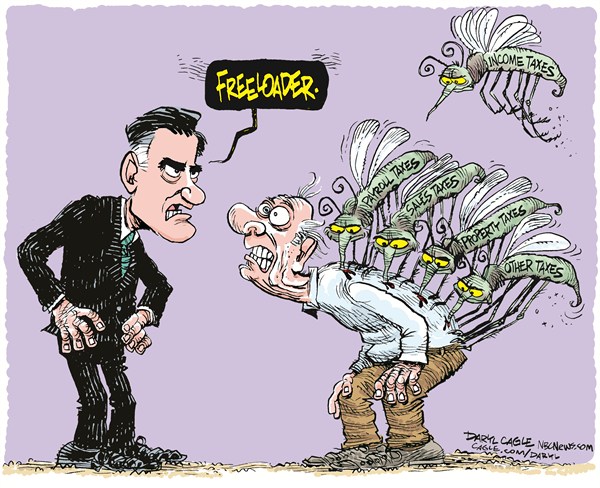 Romney hasn’t convinced critics that his comments don’t represent his real opinions about the 47 percent. Instead, he tried to piggy-back on the outcry over an old video of Barack Obama talking about “redistribution” of wealth, but that only distracted voters for a short amount of time… 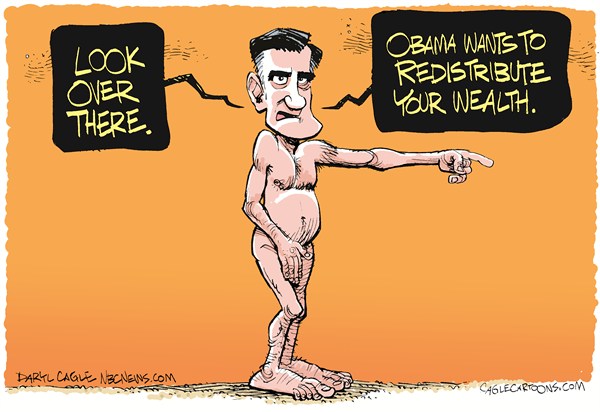 Unfortunately for Republicans, Romney’s personality is about as warm and inviting as plants that grow in the heat of the desert… 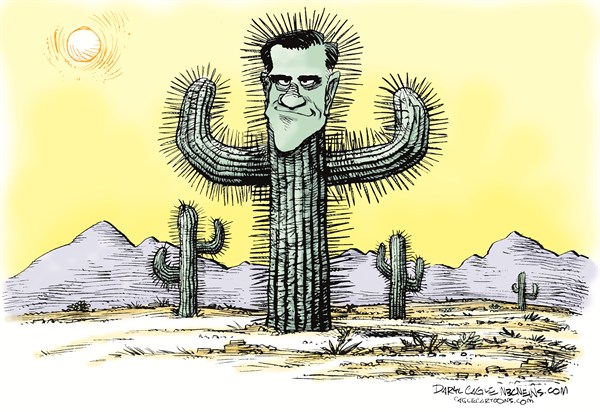 6 replies on “My Romney Cartoons: Things Not Looking Good for Mitt”

As the Republican ship sinks, the effort will turn from winning (ie losing) to blaming. We will hear this oft repeated bit of conventional wisdom: there's plenty of blame to go around.

Here is a poem by 85 yr old Hal O'Leary on this topic:

To say there's blame enough to go around.
It means of course that no one will be blamed,
And those responsible will not be found.
With guilty parties never being named,

It means of course that no one will be blamed.
The ethics we once counted on are gone.
With guilty parties never being named,
Gone also is the truth we counted on.

The ethics we once counted on are gone.
Deceit is now the key to our success.
Gone also is the truth we counted on,
And with it, loss of trust is limitless.

Deceit is now the key to our success.
It's now 'the thing' for one to lie and cheat,
And with it, loss of trust is limitless.
We've got to recognize it as deceit.

It's now the thing for one to lie and cheat,
And those responsible will not be found.
We've got to recognize it as deceit,
To say there's blame enough to go around

Why have the war crimes of Bush/Cheney/Rumsfeld/Rice/Powell gone unpunished.? Because there is plenty of blame to go a around (the Dems supported; the media supported……).

What is likely to happen now is a a concerted effort to smear Obama big time and fear mongering like " he is a muslim" . No one has looked into the Mormon Cult and its Creeds. It is downright scary at the upper levels, much like the Church of Scientology. At the grass roots level both look benign. But then again Mitt cant be that good a Mormon since he is supposed to give most of his wealth to the Church. 🙂

Yes, Christian, the scapegoating will continue.

It has occured to me that the Morman religion has much in common with the Taliban form of Islam:
a "puritanical" attitude towards smoking, drinking, swearing, sex outside of marriage, subordination of women, , etc" and a heaven which promises virgins.

A religion which bribes its members with the promise of virgins is a religion based on sexual repression. A healthy sexual person does not crave virgins. Only a person corrupted inwardly and without healthy sexual practices can be bought off with the promise of enjoying virgins (wouldn't that be young girls?) later on. Stuff it now; sexual profiglacy as y our reward.

From Wikipedia: "The prevailing view among Mormons is that God once lived on a planet with his own higher god.[3][4]" That is not the God of Abraham, accepted by both Muslims and Christians and Jews. And the Mormons have God the Mother alongside God the Father: two gods….hmnnnnn. Jesus, born of a virgin (hmnnnn actually Mormons believe she had sex with God (once human))), created many inhabited planets. And God once lived as an ordinary man on earth (this one).

Basicchristian.info claims that Islam and Mormonism are very similar: in loving Christian rhetoric, they state: "The concept of Heaven for both Islam and Mormonism (Latter Day Saints) are basically the same. Both believe heaven to be some type of brothel where droves of women are there for their various whims. To both of them the rewards of heaven are sexual and physical; not Godly and not Spiritual."

But what about those virgins. First, the Muslim vigins are spiritual beings of pure nature(they claim). Ok.
How about Mormon virgins? If God Himself were an ordinary flesh and bones person, wouldn't their virgins be real earthly women? Well, first how about virgins on this earth (not the next planet where you go in Mormon theology)? There are admonitions against polygamy in the Book of Mormon, but they are contradicted by this passage:

Ok, virgins in heaven…..who knows? In the parable of the virgins, Jesus likes heaven to 10 virgins..hmnnnnn But Muslim virgins–metaphorical or real? Well, damn it, I can't find any credible answer. But heaven, for Mormons, is real life on another planet so I will assume that they can have as many virgins, if they marry them, as they wish. Or do their old families go with them to the same planet?

Conclusion: Mormonism shares some features with fundamentalist Islam but also has unique features; it has some shared themes with Christianity but varies in fundamental ways. The more I read about the Mormon religion, the more I realize how really crazy it is. But I have one good recommendation to make: Mormonism grants salvation thru good works. Their fallacy is to think that all other religions (from the Mormon Book, Pear of Great Price) are wrong and cannot deliver salvation.
Also, their concept of good works includes obeying Church doctrine and missionary work…whereas I would think good works would be more like Jesus, helping the poor, comforting prisoners, healing the sick. Mormons like Romney equate getting rich with good works—and this is where Mormonism leaves Islam and embraces Calvinism…the doctrine that wealth is a sign of God's blessings and earned salvation……a puritanical concept after all. Romney is pissed because his religion teaches him he is blessed by his wealth, but the public is rejecting his candidacy. Well, they (and he means the 99% who are not Mormon) will all go to hell! So screw em!

If you ignore all of the eveidence to the contrary of every single one of these claims, then agree with The Prophet Kyle.

The only way to prevent American soldiers from being killed in Afghanistan is to bring them home.
They are foreign invaders and occupiers to the Aghanis who, like us, see those who fight against foreign invaders as patriots.

obama has many failures and many successes. A balanced assessment weighs both, but making the worst case assumptions without even mentioning his successes, as Prophet Kyle does, is
dishonest and leads to a skewed view.

Anyone who focuses on "Obama's lies" without mentioning the far worse Republican lies is just parroting rightwing propaganda…and need not be taken seriously. Assumptions made without support can be dismissed without further discussion. Kyle is a deadender, whining about Obama as he goes down with the Romney ship. Blame Obama, blame the media………………learn nothing.