News of Mitt Romney’s choice of Wisconsonis Rep. Paul Ryan as his running mate broke late Friday night. By Saturday morning, our conservative flamethrower Gary McCoy was first on the scene, beating everyone (including me) to the cartooning punch: 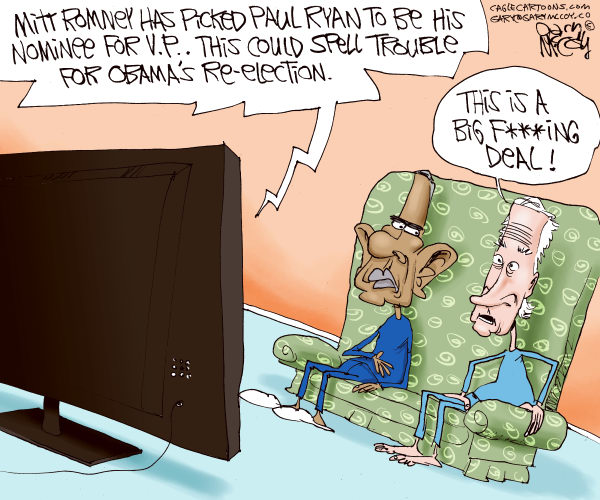 I asked McCoy what he thought of the pick, and he responded:

Obviously, I think Mitt Romney made a great choice by picking Rep. Paul Ryan for his Vice Presidential running mate. Could he have made a better choice? Oh sure, Jesus perhaps. But on second thought, that would have only invited more vitriolic criticism from the left, in particular, Bill Maher, who would have likely donated another million dollars to Obama’s super pac just to smear the Son of God as another extreme right-winger who is anti-government and for pushing his Christian values on America.

Despite lacking Christ’s pure divinity, Paul Ryan is a cool-headed, economic Einstein. Sure, with him as Vice President, the country will sorely miss Joe Biden’s hilarious gaffes. But that’s just the price we’ll have to pay to finally get our country out of the gigantic debt that team Obama has thrust upon America, and relieve our future generations of the China-red shackles that it has forged for them.

What’s your thought of the pick? Check out all of our Paul Ryan VP cartoons, and either comment below or drop us a note on our Facebook page.

Oh please. Daryl, the trash that Gary draws shouldn't even be on this website. He's a disgrace to political cartoonists everywhere. He's good for some offensive laughs, and is a great example of how delusional extreme right-wingers are, sure, but just because it makes for a good show doesn't mean we all want to watch it.

As for the cartoon and his statement on Paul Ryan, typical Gary spin that goes against common sense and all evidence to the contrary. I suppose if you want to try to keep shoving your political opinions down the throats of others, you need to keep doing it like that.

Even when the American public finally puts these clowns in their place and shows them exactly what they think of them and their politics by re-electing Obama in another landslide, Gary and others like him will continue to try and spin excuse after excuse and make things appear to be something else.

It's best to just ignore such idiots, and not give them a public forum for their stupidity.

Well you might be right about Gary's drawings not belonging here. It could called Dayrl Cagle's Liberal Political Cartoon Index even with the smattering of conservative cartoons here. Don't think you've got much to talk about shoving things down peoples throats, William. Might as well add a special conservatives to the back of the bus sign. I swear, it is like the Democrats are trying to get back to the days when they were the political party of the KKK.

Obama's wasted his damn time on enough foolishness and hasn't done much to improve conditions. I'm not a Romney fan in the slightest, but with Paul Ryan at his back, I'm deeply tempted to give them a chance.

Why do the Republicans all think Jesus would join their ticket? I am sure Jesus would be for the 1%. The Son of God would be all for gutting the Affordable Care Act, because that heal the sick stuff just wasn't realistic. No welfare, we should not feed the poor, education for only the privileged, Jesus did not teach the masses. Oh, and of course, Jesus is pro-NRA, The lord loves guns. You are right, he should have choose the King of Kings, Jesus hates liberals!

Well, if "GOD HATES FAGS!" why shouldn't Jesus hate liberals? Wasn't hate at the core of Jesus's teachings?
I'm still having trouble figuring out how supposedly "Christians" reconcile their religion with Ayn Rand, but anyway… I guess that's something Paul Ryan can explain in the next few months.

Making the conservatives sit in the back of the bus would be great. They've been doing it to everyone else for the last century. Blacks, women, gays, hispanics.

That's probably a good explanation for this whole wave of wackiness in the Republican party and acting like spoiled children. They sincerely believe they are just entitled to be the majority and tell us all how to live and what we can and cannot do. They want us to keep paying the price so they can live in luxury.

If you hadn't noticed, we're all sick of it.

The last thing we're going to do is elect two wealthy white guys who agree with those wacky Republican ideas, and force blacks, women, hispanics, and gays to the back of the bus again – or possibly even kick them off the bus entirely.

Gary's cartoon is funny because it shows the opposite of reality.

That cartoon should show Obama and Biden cracking up and cheering. The rest of the Democratic party sure is.

Oh yes, liberals are soooo much better. They never tell us all how to live and what we can and cannot do.

I see more racism, misogyny, and bigotry every day pouring out of the damn democratic side than anywhere else. You give shit to business and wealthy folks, when the biggest damn political contributors are mainly unions giving to the Democratic party. The heads of the Democratic party use the same immunity to insider trading to line their pockets as do the Republicans.

Yes Democrats used to be the party of the KKK. They also used to be Conservatives. Once the parties flipped the class embracing segregation became Republicans, still Conservatives. Fancy that! Just a coincidence I'm sure. Please go back to lobbing grenades without any cognitive dissonance.

"Obviously, I think Mitt Romney made a great choice by picking Rep. Paul Ryan for his Vice Presidential running mate. Could he have made a better choice? Oh sure, Jesus perhaps…" – Gary McCoy

The Mormon Mitt Romney would not have picked Jesus as his VP running rate, as he believes that the "brothers" Jesus and Satan are a package deal…

Remind me again what party Robert Byrd belonged to his whole political career?

Byrd seems to be the only example/exception the GOP can come up with.
Not "talking points," just one… point. And kind of dull from overuse.

Liberials usually seem to be on the side of letting everyone live their life. It's the Republicans / Conservatives who want to tell people not to be gay or that the rights of gays/blacks/women are somehow 'wrong' because it violates what they believe. It only makes sense in terms of their religion, I don't really think you can logically argue why someone else isn't entitled to the same rights you are.

Democrats and Liberals certainly have their share of racists and such, but it seems to be a lot less prevalent. There are also plenty of corrupt politicians who are from both parties. No disagreement there.

Usually? Most of the Nanny crap these days seems to come from the blue side. The invasive community survey forms from the Census, various and onerous EPA rules for in the house and on residential property, gun control, junk food laws,, the Health insurance issue of Obamacare, smoking bans, licenses for selling knives, blah blah blah. My list, it is endless. Sure the conservatives have done some silly stuff. However, most of that is religiously based. There is a very finite limit to what they can pull with that in this modern day. Really what are the big religious issues? Abortion and gay marriage? Can you honestly think of others? Serious others. Creationism? Here in the bible belt, even the more religious kids think that's a crock of shit.

For racism? I really don't think there are more among the conservatives. Would any of you recommended a midnight stroll through a working class urban minority neighborhood where you are obviously not of the local majority? Not many republicans there I wager. I actually live in an area where there is still active Klan. Yet, lo and behold, things are peaceful. There are not many conservatives that think that minorities, women, or even gays & lesbians should be denied their constitutional rights. Racism isn't the same issue it used to be. We are now generations past the civil rights movement. Kids have grown up with a public school system and culture that supports civil rights.