Brilliant Canadian cartoonist Cam Cardow, the staff cartoonist for the Ottawa Citizen, had the cartoon below rejected for being too cynical and unfair. “I think it’s fair comment,” Cam wrote on his Facebook page, “but I’ll accept the cynical tag.” Cam expanded his thoughts behind the rejected cartoon:

It’s not that I think Canadian athletes are mediocre, (because they are not) it’s just got to do with them up against some really tough competition this year,” Cam wrote. “As a result, some of Canadian coverage I’ve seen has been the proverbial making lemonade when given lemons. There hasn’t been a lot to celebrate from a Canadian perspective so far. In contrast, we have the U.S. coverage which can’t keep up to their medals and victories. It’s not a criticism, just pointing out the reality of it.

Here is the cartoon Cam drew in place of the rejected one: 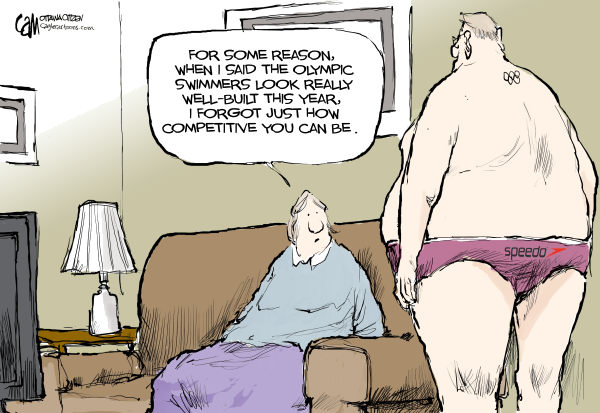 Canadians have universal education and healthcare and now are richer than Americans. Like they care that they aren't the greatest swimmers or runners in the world. The Olympics has become a circus of mass distraction. It's the economy, stupid!

Yep! (except for the unwashed masses).

Great cartoon, and I can understand why it got rejected, even as I think it should not have.

As for News Coverage, I hear the same disease affects every nation's coverage – Homerism. My friend in Japan tells me he can see only the events in which the Japanese are participating. I suppose that is "normal," if restrictive.

I was at Wakkanai Air Station for the '64 Tokyo Olympics, and we had great coverage in English. We took the feed from NHK, and translated it into English for the troops on the Air station, and the families in base housing (we had a closed circuit TV network). And we even got permission.

Isn't the Olympics about each participant doing their best? I think the NBC coverage stinks except for Chris Jansing and Mary Carillo. I am saddened to see any athlete lose at such a highly covered event. No matter how well an athlete performs they went to the Olympics and I applaud their efforts.