We’ve heard a lot about the NRA and gun control in the wake of the tragic shooting in Aurora, Colorado. Lots of our cartoonists have already weighed in on the issue (check out our collection of Gun Control cartoons), but readers seem polarized by conservative cartoonist Gary McCoy’s cartoon about the call for increases gun control laws following the shooting: 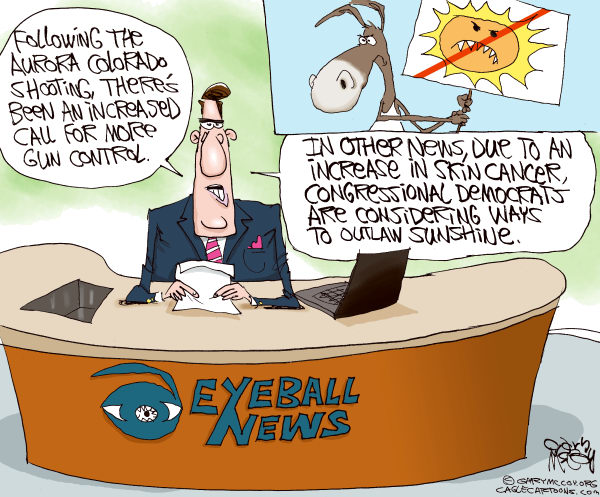 Here’s a sampling of some of our readers’ comments on Facebook:

Suzanne Chiles: When it’s easier to buy 6000 rounds of ammunition than it is to buy a box of Sudafed, I’d say that yes, we probably do need some more laws concerning the ownership and operation of firearms.

Steven Pennella: Total cheap shot considering Democrats are pro-solar power and the fossils of the GOP are pro fossil fuel.

Michael A. Cooper: Why are ALL the gun laws aimed at the law abiding and NOT the criminals?

Rick Wade: If the existing laws were enforced the situation would improve dramatically.

Bob Jones: Cartoon is a non sequitur. Guns and gun violence, unlike sunshine, are not naturally occurring phenomena.

Eric Nelson: Here’s a thought, let’s enforce our laws on the books and close loop holes for gun shows. Tax ammunition like talons out of existence and bring back an assault weapons ban. For those enthusiasts who love assault weapons, I’m sorry. Hell pot is illegal.

Foolish argument – sunshine has many uses; guns have only one.

Love the cartoon. It correctly portrays the fact that Democrats want to create a law to govern every aspect of our lives, to solve every woe…

Those who comment about the benefits of the sun (solar power) or think the cartoon is stupid because the two are unrelated, do not get the cartoon.

Isn't it the Republicans that want to create laws to govern every aspect of our sex lives? Is anything accomplished by hyperbole?

While sunshine is a naturally occuring force of nature, skin cancer is usually the result of willful negligence — tanning, no sunscreen, etc. So the cartoon is not too far off, especially considering how far off his rocker Bloomberg is getting. Next thing you know, tanning shops will be closed and beaches will be policed to ensure Joe Public isn't getting too much sun. Nanny state.

McCoy is a Troll. He doesn't want to persuade or even make sense. His objective is to annoy people enough that they react, and this cartoon is milder than many of his. Henceforth I refuse to feed the Troll.

What an asinine cartoon! Is there no low to which these wingnuts will not stoop? Mankind can live without guns, we can not live without sunshine. We can live with alternative energies, we can not continue to live with fossil fuels that are simply not sustainable. How anyone can be so willfully ignorant about this issue is beyond sane comprehension. But then, we're dealing with irrational beings, right?

Perhaps – but when are they going to control the crazies? Isn't it easier to get help for the one or two nuts that pull this every other year, than to spend yet another billion dollars trying to control what is already a 2nd Amendment right? Do what is smart, not what is expensive – dumb – and just a feel good but no result law.

This Holmes guy had wrote a letter a week before to his doctor detailing his plans, but no body opened it! When are we going to take these crazies seriously and make them take their meds? Don't give me the "Its a violation of their rights!" – argument, because it doesn't hold water – as long as you use due process under the law, the constitutional requirement is met.

Also – If just one individual in the theater had his/her CCW permit, the outcome would have been dramatically different.

Oh weird! Gary McCoy makes another brainless, moronic, insane point, and subjects us to his horrible 'art' at the same time!

I got an idea lets outlaw baseball bats, knives, cars, and gas. They all cause death as well. Since Britain has outlawed (for the most part) firearms, stabbings have increased. By the way, guns are used for hunting and sport shooting, not just for personal protection. If you don't like killing Bambi and eating him, go chew your grass somewhere else with the rest of the cows.

By the way, guns are used for hunting and sport shooting. Sport shooting is an Olympic event.

I’m going to put a thousand dollars in your pocket or purse, and then drop you off in the worse neighborhood in your community. You’re unarmed, but you can keep your cell phone on your person.

The police; arriving 30 minutes later, will write up a report and call in the service to remove your body.
If you were armed, with your conceal and carry, the sequence of events would change for the better.

Hey Einstein, since your limited intellectual capabilities keep you from understanding a cartoon, let me lay it out for you. Liberals blame guns for gun violence, instead of the perpetrators of the crime. Therefore, I portray a situation where they would blame the sun for skin cancer instead of the people who choose to overexpose themselves. You're welcome. Now go back to watching Springer.

As Bob Dylan once said, you don't have to be a weatherman to know which way the wind is blowing. My "limited" capacities tells me that trying to equate the Democrats to the insane defense of WMD is indeed stooping to low levels, because the senseless acts of violence and bloodshed is not a political issue, it's a life and death issue that must be addressed.

I care not to play tit for tat with a wingnut. However, I can understand that if one's livelihood is dependent of a biased POV, I suppose that one has to defend his work. Fortunately, I'm not tied to any party or ideology. I just defend what I think is right, and try to refute that which I think is wrong, and your "cartoon" was out of line, in my opinion. And as far as I'm concerned, this ends here.

As a foreigner, I obviously totally misunderstood the meaning of this cartoon (from the comments). I think that to most of the civilized world, it says that there is as much chance of any form of gun control in the US as there is of outlawing sunshine. In other words, that the gunnuts in America have so much political sway that they are stronger than a force of nature.

They outlawed knives too, at least any pocketknife with a locking mechanism of any sort, and carrying a knife of any kind puts you up for a rousing bit of harassment by the police. Maybe the next thing over there will be walking sticks or canes, who knows?

Mc Coy – nice cartoon. It is too bad that some of the commenters had to take it so literally. I like the point that some folks want to control everything with a law, no matter how unworkable or foolhardy it is. Well done, sir. Keep poking 'em with a good sharp stick.

It is outstanding to see some political cartoons from the other side. I do get tired of being portrayed as some sister raping inbred bent on murder though I'm not even a republican. I'm mostly in libertarian camp. I have a friend that is a member of the Pink Pistols, a pro-gun gay & lesbian organization that advocates self-defense against bigots of all political affiliations. I certainly support gay marriage and I even support drug legalization(the failed war on drugs being the reason for so much gun violence). I see where this cartoon is coming from. It is the pointlessness and foolishness of this debate. It is as constructive to ban sunshine for causing skin cancer as it is to assault gun rights in America. Why? Because either way, you're not going to stop wither skin cancer nor wackos killing people with guns. You're not even going to reduce the number of deaths. We can stop illegal products from entering the country as well as we can stop sunshine from reaching the surface of the planet!

This cartoon has more to do with the fact that the talking heads in government talk about an issue glibly and then in the next breath move on to some topic more to their liking. Haven't you noticed when asked about a serious topic the legislators make a comment (or not) on your question and then segue into the talking point of the day or campaign? Hence short blurb on gun control and a bigger blurb with graphics out of the same breath.

@Roadkill: You hit it right on the head, both for the cartoon and for the way these cartoon-of-the-cartoon blogs usually go. Reminds me of one of those scenes in (pick your favorite old western) where everybody in the saloon is punching everyone else, and no one remembers why, or cares. I'm from CA, was from NJ, before that NYC: I'm familiar with useless gun control laws written by cheap politicians. I'm also familiar with useless health laws trying to keep people from killing themselves for cosmetic reasons. The Army is trying to keep guns away from separated or on-leave servicemen to cut down on suicides, when they know the real reason is a complete inability to address the the issues of PTSD and concussion syndrome. It is inhuman to argue when people are dying, but I'm sure you can't prevent all human problems with new laws.