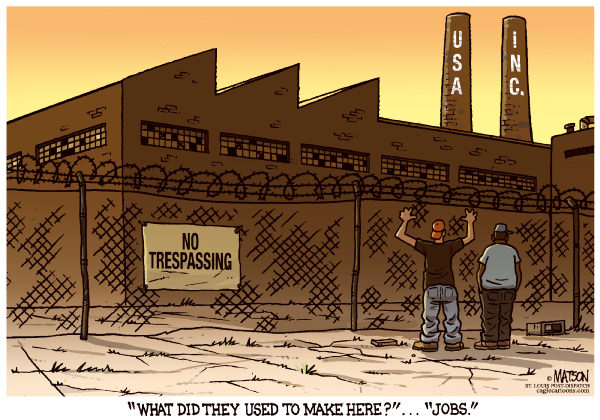 On Friday, Lee Enterprises announced it was laying off  nearly two dozen employees at the St. Louis Post-Dispatch, 14 of which came from their newsroom. Among the laid-off journalist is someone familiar to Cagle.com readers – their staff cartoonist, R.J. Matson.

Matson, whose cartoons I syndicate to newspapers nationally with Cagle Cartoons, moved to St. Louis in 2007 to become the staff cartoonist at the Post-Dispatch, and has survived many cutbacks and layoffs along the way.

“I had a good seven year run. No regrets. I had the honor of working with a lot of great journalists, many of whom were laid off or jumped ship, during my time at the Post-Dispatch,” Matson said.  “When my number came up, I didn’t take it personally.”

We will continue to syndicate Matson’s great cartoons. He’ll continue to draw four cartoons a week for Roll Call, but he’ll miss drawing cartoons about the local politics of St. Louis and Missouri.

“Desperate times call for desperate measures,” Matson said.  “But desperate measures won’t bring in new readers and will alienate a lot of loyal readers, many of whom really like to see their community reflected in local editorial cartoons.”

4 replies on “Cartoonist Matson Among Layoffs at Post-Dispatch”

Alas. Mr Pulitzer must be spinning in his grave

I subscribe to the STLPD, and while I have always admired Mr. Matson's artistic talent, I have to admit, I hate his liberal views. I truely hope he gets another job soon, just not back at the PD.