It’s difficult to watch cable news at times. What do new anchors hope to get from Romney’s surrogates that over any insight or analysis on the campaign:

Obama also has his own army of well-trained surrogates to keep pushing the campaign’s narriative:

Lately, Obama has been on the attack about Romney’s time at Bain Capital and his refusal to release additional years of his tax returns: 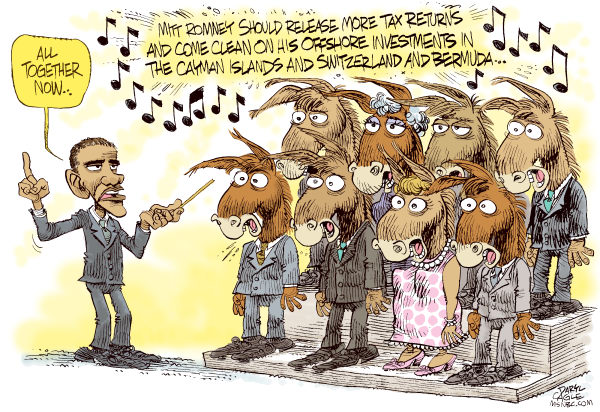 Despite the attacks, the candidates have been able to make the choice in the upcoming election clear:

12 replies on “My Recent Cartoons About the Presidential Campaign”

It would seem Cagle feels Romney is his only target – if you want an EASY target go for the SITTING PRESIDENT (and I mean that literally – oh unless he's on vacation or playing golf). Cancelling Cagle – WAY TOO FAR LEFT

Obama preaches outsourcing to Mexico in the 90's, but wasn't it NAFTA (Bill Clinton's baby) that opened the door to outsourcing?

Chris, many Republicans are calling for Romney to release his tax records and get it over with. Does that make them liberals. Argument by labeling is a logical fallacy and has no merit.

During the war in Vietnam, based on the lie of the Gulf of Tonkin, the US killed several million civilians.
Those of us who object to war crimes protested. Ayers bombed buildings, warning people to evacuate as his goal was not to harm people but attack the symbols of power. He never hurt and soul, and because the FBI broke the law to catch him, he was not convicted, tho his wife was. Since then, he has had a meritorious career as an educator and professor.

Obama knew him on various charity boards….big deal. When Ayers was fighting against the evil war in Vietnam, Obama was 10 years old.

Today, Nelson Mandela is celebrated as a great statesman and has been welcomed by all US Presidents, but decades ago he was a "terrorist" and spent a long time in prison. Today, he is the world's greatest "freedom fighter." Should all those Presidents be condemned for celebrating a "terrorist?"

And what has this to do with Romney's hiding his tax records? Zero…it's a red herring. It's a way of .avoiding dealing with his secrecy about his past . By the way, Romney, who wants to attack Iran, was a draft dodger, as only Mormons, of all relgions, are allowed to avoid service by preaching their religion. He spent the war trying to convert the French, another chicken-hawk.

So, why won't Romney show his tax returns?

SEN. CHARLES SCHUMER (D): “79 percent of the 2.1 billion in stimulus grants awarded through it went to overseas companies.”

Bombing of the buildings is terrorism. He was lucky no one did died.

Obama preaches outsourcing to Mexico in the 90's, but wasn't it NAFTA (Bill Clinton's baby) that opened the door to FURTHER outsourcing? – correction

Romney has released his tax records for the last 2 years. Liberals are trying to use this as point out he is rich. Get over it, he is rich, but so is Obama and Biden; even though Biden considers himself part of the middle class. The only people I heard raising a fuss is Democrats like Debbie Wasserman-Shultz; who by the way has bank accounts in Caribbean nations and Europe. Obama's financial Czar pays no corporate taxes and outsources their jobs.
G.E. employs about 300,000 people. Fewer than half, 131,000 are working in the USA.G.E. has 277 plants in 43 countries and keeps overseas profits overseas. Thereby avoiding U.S. income tax. In fact, General Electric paid zero federal income tax in 2010 according to the "New York Times." – Fox News

Ok. Chris, I read the whole thing. Bill Ayers was against the Vietnam War. Much more liberal than Obama. They were not close.friends. What is your freaking problem? Illiteracy?

If he is a crook, then the IRS would know, correct?

He has filed all the required forms required of him.

Tax form disclosure is not required. Over 98% of Congress also refuses to disclose ANY tax history. Why, because they are not required to. (And it would show us all that they are 1% as weel)