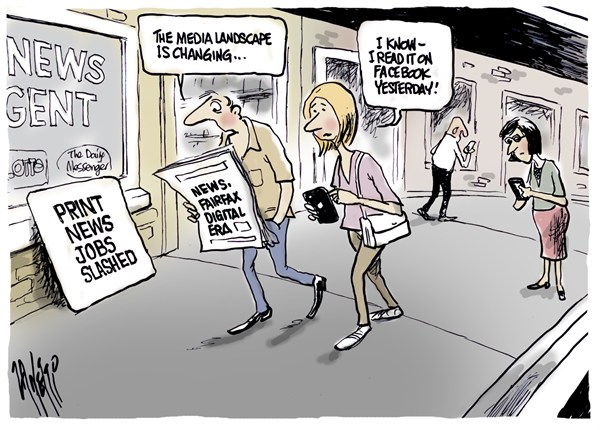 Newspapers in the U.S. aren’t the only ones suffering from a steep decline in revenue as advertisers move online. Australian media company Fairfax, owners of Sydney Morning Herald and The Age, sent shockwaves through the country by announcing it would layoff 1,900 members of its staff and put its online versions behind a paywall.

I asked Aussie cartoonist Paul Zanetti (whom I syndicate through Cagle Cartoons) to sum up the latest for our American readers. Here’s what he wrote:

With Fairfax, there are a planned 1900 job losses. 1500 of these are from the Sydney and Melbourne printing plants – which are being sold off (who will buy if the majors are getting out of print?).

The rest of the job losses will be journalist redundancies (400) over all their titles. The plan is to go hard into digital and with a content pay wall.

This has been on the cards for years. I’m surprised it’s taken so long. It’s not that there’s no demand for news and information, which is as strong as ever. It’s the delivery method that’s changing. Information and news has to be instantaneous in this competitive and fast-moving world. Newspapers can’t compete with the internet, radio and TV (particularly cable TV).

Fairfax’s Greg Hywood seemed to be reacting to the inevitable, looking frightened at his news conference this week, with an air of gloom and doom.

In contrast, News Ltd’s Kim Williams looked relaxed and confident, when he announced yesterday a bid for another major media company and various future plans, saying, NEWS is not a newspaper company but a media company. He also added that NEWS sells 11 million newspapers a week (in a country of 22 million and Fairfax sells 3 million newspapers). Having said that, it’s the online ads, not circulation decline, affecting the bottom line.

We should embrace and move with change. It’s exciting. The internet provides opportunities for all. It’s a great equaliser putting more control and choices into the hands of the every man (and woman – and kid for that matter).

Those crying out for the status quo to remain, are the latter day luddites. The news media will continue to grow. Only the delivery will change.

I see the glass half full. Bring on the exciting future of media.