Yesterday, columnist Tina Dupuy (who I syndicate to newspapers and Web sites nationwide) wrote about the need for gun control in America, noting that the NRA was for gun control over its first hundred years and only recently started to mention the Second Amendment as their cause.

There’s no cartoonist who cares about the issue of gun control more than Bill Day. Here are some of Day’s best cartoons about guns in America. 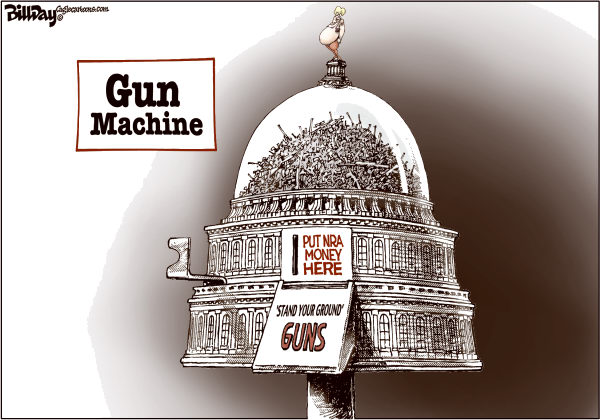 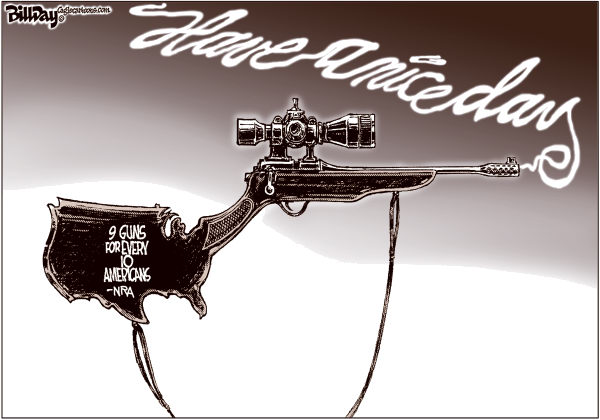 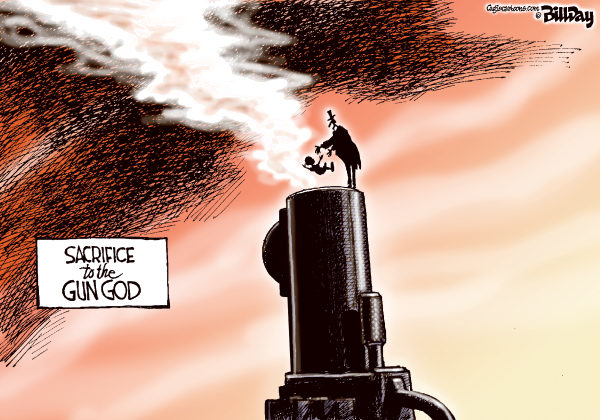 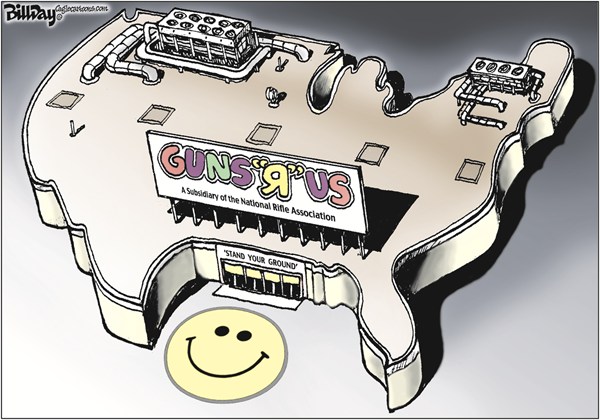 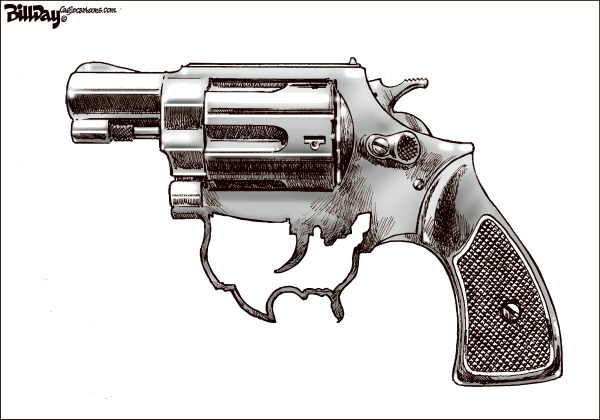 What do you think – do we need more gun control laws, or less? Comment below or weigh in on our Facebook page!

America needs economic control, so that people aren't driven to crimes of desperation.
America needs mental health control, so that the unstable among us can get the proper care preventatively instead of furthering this culture of secrecy.
America needs legislative control to make decisions regarding drug laws that actually make sense, rather than hoping for boy scouts and shrugging our shoulders at warlords.

Gun control is noble, but a symptom at best.

If more guns make us safer, then why aren't we the safest nation on earth? Instead, we, who have more guns than any other nation, and are the most dangerous! I have never seen or heard of any government official propose to "take away your guns", only to restrict the owning of certain weapons that are not legal for hunting anyway. No one has ever proposed to take away your .30-30, your 30.06. or your shotgun or .22!

You familiar with the camel's nose under the tent.as regards gov't regulation?… Most dangerous? An extensive study that one of us (Kates) recently published with Canadian criminologist Gary Mauser confirms the negative results of two large-scale international studies over the past 15 years. ("Would Banning Firearms Reduce Murder and Suicide: A Review of International Evidence," Harvard Journal of Law & Public Policy, vol. 30, pages 651-694.) These studies compared data from a large number of nations around the world. There were no instances of nations with high gun ownership having higher murder rates than nations with low gun ownership. If anything it was the reverse, for reasons discussed below.

For example, though Norway has far and away the highest firearm ownership per capita in Western Europe, it nevertheless has the lowest murder rate. Other nations with high firearms ownership and comparably low murder rates include Denmark, Greece, Switzerland, Germany and Austria. Holland has a 50 percent higher murder rate despite having the lowest rate of firearm ownership in Europe. And Luxembourg, despite its total handgun ban, has a murder rate that is nine times higher than countries such as Norway and Austria.

It turns out that in nations where guns are less available, criminals manage to get them anyway. After decades of ever-stricter gun controls, England banned handguns and confiscated them from all permit holders in 1997. Yet by 2000, England had the industrialized world's highest violent crime rate — twice that of the U.S

May I as a foreigner to your great country comment?
Sweden has roughly 10 million people, 1 million hunting rifles for bullet ammunition and about 700 000 hunting shot-guns (that makes almost 20%) We have about the same number for the past 60 years (statistics), i.e. 1 murder per 100 000 inhabitants. The USA has had a variation in the same time from present 6.4 (actually the same as 1950s) and about 10 in 1980s. I do not have the actual guns data. I guess you have much less then we have.

However, can we really base our conclusions on only this statistics. I claim; no.

The USA is very low in murder rate compared to a lot of countries, Asian, African, American and yes European. Yet Sweden has a tenth of your rate. I still do not think the murder rate is strictly correlated to the number of weapons.

Maybe the discussion should concentrate on the actual way we use our rifles and guns. Here, We stock them in bolted safes, with ammo locked in as well. The only time a rifle is hot is when have walked into the forrest, and I sit in the woods waiting for that elk and finally put the bullets in their place. At all other times the weapon is of no significance.

Some of the commentators here state that they carry a gun for protection. I always ask myself, why you dont carry something more discouraging. I would suggest a pair of very long two handed swords, a small rocket launcher or a bow and arrows (they are absolutely harmless, but a bit heavy and bulky and rather fearsome).

Is the whole question not really about being scared for the unknown, expecting your fellow human beings to be a potentional murderer. Impose some restrictions, yes, don´t carry a gun (you may even shoot your own foot), and trust in your surroundings. Like I do when I visit the USA.

Thanks for the toon and the references, everyone. Now that several years of baloney have been addressed, maybe we could correlate suicide deaths to unemployment?

And suicide by auto (not the kind with the garden hose, the kind caused by driving 90 MPH on a non-empty freeway) might be another area of study.

well i am 60 years old pakistani and I enjoyed my early life to the fullest. I was doing my masters in1977 when suddenly military dictatorship toppled the then elected democratic government; the prime minister was hanged wrongfully, and the dictator designed new Islamic laws to demolish the progressive developments with the collaborations of USA and SAUDI ARABIA, …… slowly slowly it took 44 years to convert this peace loving country in to a gun runner state, an Intolerant bigotry society, you know my country is as good looking as California …. minus the guns; Pakistan is a Heaven on Earth,cheers

"Yet by 2000, England had the industrialized world's highest violent crime rate — twice that of the U.S." Thank you, Maggie Thatcher.

How did you figure out that we are the most dangerous nation on earth? Have you ever been to another nation? I have, both in the USN and working internationally in the oil field for 37 years. Let me hasten to inform you that you are totally incorrect, we ARE NOT the most dangerous nation on earth, far from it. If you are not seeing government officials trying to take away guns, you must be an ostrich. Look around you sometimes, and see what the " government officials" are really screwing you out of. You might be surprised.

Once again, you can make statistics say anything you want. That study includes as "children" any person under the age of 21 who was killed as a result od felonious behavior….ie. the corner gang bangers fighting over their drug territory.
Gun control WILL NOT stop felons from killing each other, no more than drug laws keep them from selling dope. All additinal laws will accomplish is to further restrict the freedoms of law abiding citizens, and appease the sheep.

A simplistic attitude, perhaps, but what proportion of North Americans who have opted for guns in the house have actually accepted the second half of the equation? Know *when* to use, *how* to use, and are willing to accept the fallout of taking another human life in some kind of bad analysis of an apparently threatening situation? Especially when the threat is another family member, in the dark, and lack of alertness is involved? I guess that my reading of a "clear threat" is rather lacking in terms of the average domestic situation, but should really be of critical importance in the middle of the night.