It’s campaign season again, and that means controversial Reverend Jeremiah Wright is back in the news.

Back in 2008, sermons by Obama’s Chicago pastor created a media firestorm during the Iowa primaries, with Wright screaming, “Goddamn America!” Obama cut ties with Wright following the controversy, but now the outspoken reverend is back with new allegations that Obama’s team tried to buy his silence.

In “The Amateur,” author Edward Klein’s unauthorized biography of Obama, Wright said that once his controversial sermons surfaced, he received an email asking him not to preach until after the elections. The New York Times reports that the financier of the Ending Spending super PAC is considering going nuclear with millions of dollars worth of commercials once again linking Wright to Obama.

Here’s my cartoon from back in 2008 that I drew when Wright’s controversial sermons caught the media’s attention: 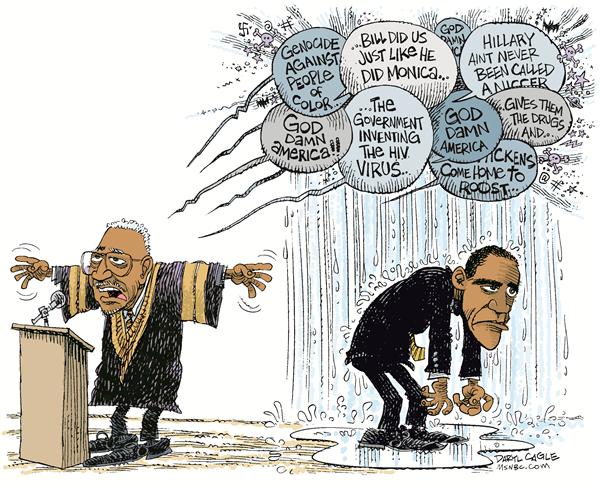 Here are some cartoons from our archives featuring Wright and Obama from the 2008 campaign. Will he become a major campaign issue again? Comment below or post a note on our Facebook page.

3 replies on “The Return of Reverend Wright?”

If Obama no longer attends this guy's church, why should this become an issue again? It makes no sense to rehash this, especially given Wright have no connection to Obama ever since he became President.

So, no, I really can't see how Wright can return, especially given I have not even heard of Wright in the media this year at all. I think this column is full of hot air.

You're actually going to believe that after attending that church for 20 years, Obama doesn't have the same beliefs as Wright? That seems a little far-fetched to me.

I attended church for 20 years. Now I'm an atheist. Turns out people can tune out BS.