Raw Police Nerves, a Texas School District and a Cartoon Yesterday, The Daily Caller “broke” the story that while living in Indonesia with his stepfather, a young President Obama ate many adventurous meals, including dog meat.

From a passage of his book “Dreams From My Father,” Obama recounts that he “learned how to eat small green chili peppers raw with dinner (plenty of rice), and, away from the dinner table, I was introduced to dog meat (tough), snake meat (tougher), and roasted grasshopper (crunchy).”

Romney supporters leaped on the news, as the former Massachusetts governor has been dogged by the story of  the family’s Irish setter Seamus, who traveled in a crate strapped to the top of the family’s station wagon on a 1983 trip from Boston to Canada.

Leave it to our terrific conservative cartoonist Eric Allie to nail the president with his latest cartoon: 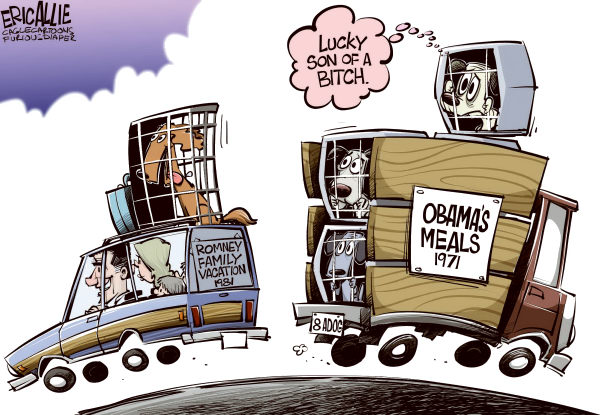 Nate Beeler, the new staff cartoonist for the Columbus Dispatch, also weighed in on “Dogmeatgate”: 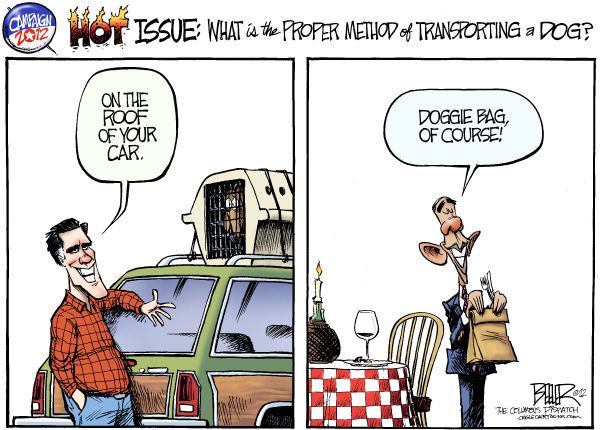 I asked Nate about his dog meat cartoon, and if he thought either dog story were fair game for reporters. Here are his thoughts:

The “Obama ate a dog” story was too juicy (apologies) to ignore. It’s just plain funny. Adding to the comedy is the fact that people are talking about the candidates’ decades-ago treatment of dogs in the first place. Obama’s campaign is “obsessed with the dog thing,” as even liberal commentators like Chris Hayes acknowledge. And now Romney supporters will obsess over the ate-a-dog thing. There are much bigger fish to fry — and like most people, I prefer seafood over canine. When it comes to election politics, fairness goes out the window. I hope my cartoon helps highlight how silly it is.

So what do you think – is it fair to attack Obama on something he did as a child? Comment below and let us know, or leave a note on our Facebook page.

8 replies on “Cartoonists Dig In on Obama Dog Meat Story”

This whole topic is indicative of just how phukked up America is. THIS is a conversation? Someone fed Obama some dog meat. The comedians should enjoy it, that's fine. C'mon, we have polluted air and water, people are starving in America, we're shooting each other left and right. Meanwhile, in Baghdad….

As a child I ate horsemeat. Well, there goes my presidential chances.

This cartoon just sucks. However, what I would expect from a right wing nug.

I agree that the whole dog issue is silly. We do have bigger fish to fry than the dog topic. I have yet to hear from either side their ideas to help continue get the economy to be better, etc.

However, I like to point out that there indeed differences between the two dog stories. Romney was an adult and he placed his pooch on purpose on the top of his car, where the poor pooch puke all over the car where Romney only water down the pooch with a hose. Obama was just a child in a foreign land, where eating dog is the *norm*. So I can't see how the two stories could be similiar.

Oh come on, it's not like he eats it every day! He just tried something new in a foreign country. Also he was a kid, while Mitt tied up his dog as an adult on purpose.

Oh, what? Eric Allie leapt onto an incredibly stupid point and hoped that his art style would keep him in a job?? Say it ain't so!

The whole thing is funny and just ripe for cartooning, because neither side has any substance to it. Yes, people eat unusual things in foreign countries, including animals we think of as pets. Yes, people strapped pets to the car in the 80s – most PEOPLE still didn't wear seat belts in the 80s. (And for the comment about the dog puking all over, being inside the car probably wouldn't have helped.)