Here’s my new cartoon about protesters in Afghanistan fighting and killing because some dumb, bigoted pastor in Florida decided to burn a Koran for some publicity.

The whole situation reminds me of the protests and violence following the Danish Cartooning Controversy that occurred back in 2005, when 12 editorial cartoonists were commissioned by the Danish newspaper Jyllands-Posten to draw caricatures of the Islamic prophet Muhammad in attempt to contribute to the debate regarding criticism of Islam and self-censorship. Even with a free press defined by law, there are other constraints regarding what can or can’t be published.

Here’s the cartoon I drew back then. It’s sad that for some, things never change. 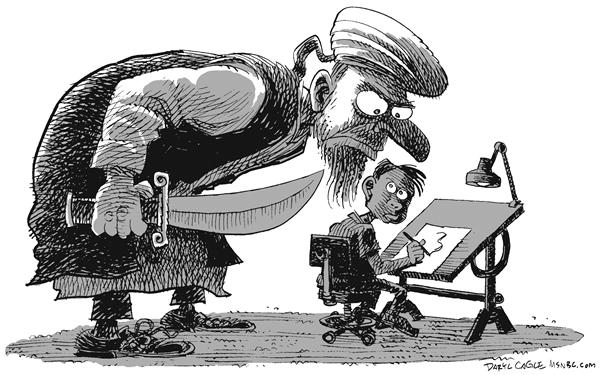 Yeah, as an avowed Leftie (or Liberal, as you ‘mericans call us) I shake my head at the coverage of this issue to date. The Koran burner is a kook but he’s just a convenient excuse for other kooks, with big fluffy beards who don’t like women, to go on a rampage (and it’s not like they need to try hard to find an excuse). We should be celebrating the fact that an idiot can burn a religious book – the Koran, the Bible – or even a flag in a (mostly) free country. Calls by the Left for him to be dealt with, in some sicko attempt at appeasement, really offends me. It offends me so much I think I might just gather up a few pals and go burn something down…

Between the American Taliban and the insanity and self annihilation of the worst of Muslims, does anyone still need a detailed explanation of why religion needs to go away?

Keep the cartoons coming! Probably best to think of freedom of speech as a muscle – muscles are known to atrophy if they go unused for too long . . .

Another thing that doesn’t change is your personal bias in favor of cartoonists. You still haven’t touched on why you would support their denigrating Islam’s Prophet, at the request of their media, yet insult a Pastor who may well have been acting out of his heartfelt beliefs. I’m not saying what he did was right, although I do lean in his favor. I’m questioning your own integrity in how you, as well as your fellow cartoonists, reacted.

I am so sick of the Muslims protesting and burning and violence over NON-issues. This has become like a dysfunctional relationship where we are expected to walk on eggshells because of their medieval beliefs while they burn Bibles as well as destroy Christian churches. In fact, I am so sick of appeasing them that as far as I’m concerned at this point I think we should pull all of our troops out and let them kill each other or just flatten the whole Middle East and turn it into a sheet of glass. Maybe with the latter we might finally have some peace and quiet. Call it the GREAT DIVORCE!

Not all religious beliefs are like Islam. Most religions are pretty peaceable and other at least allow for “live and let live”.

I was once asked by a Pakistani collegue “Why can’t the United States just mind its own business?”

We all know that answer. It’s oil! And isn’t it interesting that the Republicans, and especially the Tea Partiers, are financed mostly oil billionaires?

That young person was disgusted and embarrassed by islamic extremists, just as I and most Americans are disgusted and embarrasses by these pseudo-Christian extreamists in Florida. It’s too bad that, thanks to the internet, there isn’t any “backwoods” where these ignorant nut jobs can hide out with their sick, twisted versions of faith any more.

To paraphrase Voltaire, I believe you have the right to express your own ignorant, hateful opinion, but I sure don’t think you should ever expect us to shed one drop of American blood to defend it!

How much oil do we get from Afghanistan?

Thanks Mr Daryl Cagle, who braved the wall of silence in 2006 publishing “Those Muhammad Cartoons”, when everyone else, beside a Buffola NY satire magazine, were demonstrating an unprecedented cowardess in American media and UK media towards Islamic Imperialist attacks on our freedom of expression and freedom of drawing whatever cartoon about whomever bloody prophet, as long as it stands the test of our secular, liberal democratic laws – not the bloody sharia law. Yes, Islam hasn’t changed since 2005-2006, not even since year 621, and will never change – it is just the way Islam is, like the Vatican, they are garbage and rubbish of the history of mankind, packed in glitterpaper fooling many, unfortunately, till there is no head on the shoulder to say no to them.

His Shadow, read a damn book.
People have been fighting since the dawn of man, and will until the end of man.

And guess how many times they have been fighting over nonsensical religious intangibles? Religion is a curse, a too heavy saddle of superstition, hobbling progress.

That makes no sense what so ever.

Except “live and let live” isn’t in any religious text. The fundamental tenets of major religions are inherently intolerant of other gods and rites.